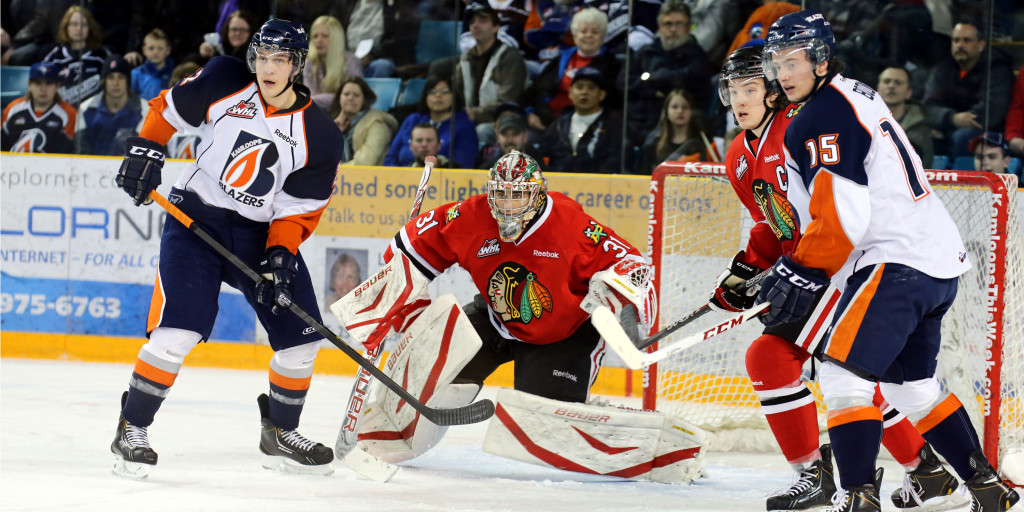 The Blazers started well but did not maintain their game in a 3-0 home ice loss to the Portland Winterhawks. The Winterhawks opened the scoring in the first period as Troy Rutkowski fired a shot that went off the post and in from the top of the face-off circle for a 1-0 Portland lead. The Blazers had a steady first period, but couldn’t score. Shots were 11-7 for the Winterhawks.

Brendan Leipsic scored an early goal for the ‘Hawks in the second period. His shot found its way through the wickets of goaltender Cole Cheveldave to make it 2-0. The Blazers were getting frustrated as Mac Carruth was playing well in goal and they couldn’t seem to find a way to finish on their chances. The Winterhawks just stuck to their game plan and capitalized on a turnover. A terrific tic-tac-toe play finished off by Nic Petan with Ty Rattie and Leipsic picking up assists made it 3-0 for the Winterhawks late in the second period.

In the third period, the Blazers had some life early on with an extended five-on-three powerplay. Unfortunately they missed the net on their opportunities and Carruth was their to clean up anything else to keep the game 3-0. As the game went on, the Blazers frustrations continued to get the best of them in a 3-0 home ice loss to the top team in the WHL and CHL.

Mac Carruth earned his seventh shutout of the season making 27 saves for the win. Cole Cheveldave took the loss making 21 saves for the Blazers. Both teams finished the game 0-for-4 on the powerplay including both teams failing to score on five-on-three opportunities.

The Blazers hit the road for the weekend as they are in Vancouver on Friday night at 7:30pm. That game will be televised nationally on Rogers Sportsnet. The hockey club closes out the weekend with a game in Spokane against the Chiefs on Saturday night.