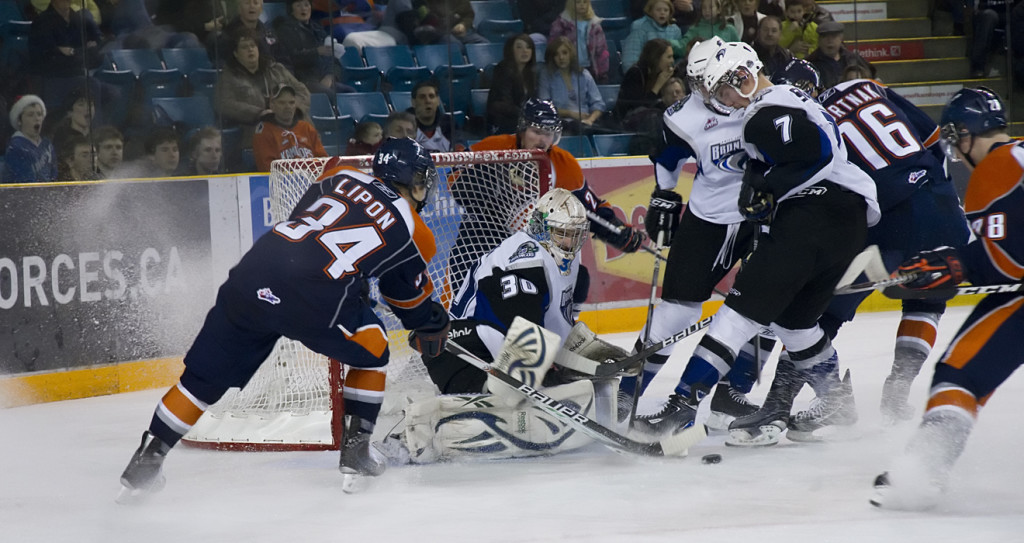 The Kamloops Blazers won their 10th road game of the season with a 5-4 victory in Swift Current Saturday night. Tim Bozon opened the scoring as JC Lipon won a race to the puck and fed Bozon for a 1-0 lead. The Broncos tied it up as Adam Lowry capitalized on a rebound and the teddy bears came flying for a 1-1 tie. Lipon tied the game up after the teddy bear clean up and the ice clean. Bozon flipped a puck to him and Lipon broke in and scored on a breakaway for a 2-1 lead.

The Blazers continued to build on their lead in the second period. Aspen Sterzer won a face off, beat the goalie to the puck and shovelled his his second goal of the season for a 3-1 lead. The Broncos responded when Taylor Vause found a rebound after a rush and cut the lead to 3-2 in favour of the Blazers. The Broncos tied it up late in the period capitalizing on their second 5-on-3 power play of the game. Vause found another rebound in the crease for his 20th goal of the season.

The Blazers closed this game out though. JC Lipon did it again, after being set up by Tim Bozon. Lipon scored in the dying seconds of the power play to give the Blazers a 4-3 lead. Brady Gaudet forced a turn over and Tim Bozon found the puck and buried his second goal of the game to give the Blazers a 5-3 lead. The Broncos made it 5-4 when Coda Gordon tipped a point shot on the power play with just over three minutes left to play. Goaltender Cole Cheveldave made a great save in the dying seconds of the game, and the Blazers preserved a 5-4 victory.

It was the Blazers first victory in Swift Current since January 27, 2006. Bozon enjoyed his first career four point game. Cole Cheveldave earned the win again his 14th in 19 starts this season. The Blazers were 1-for-2 on the power play and the Broncos finished 2-for-6. Next up for the Blazers is a game tomorrow night in Regina. Game time is 4:00pm Pacific Time.