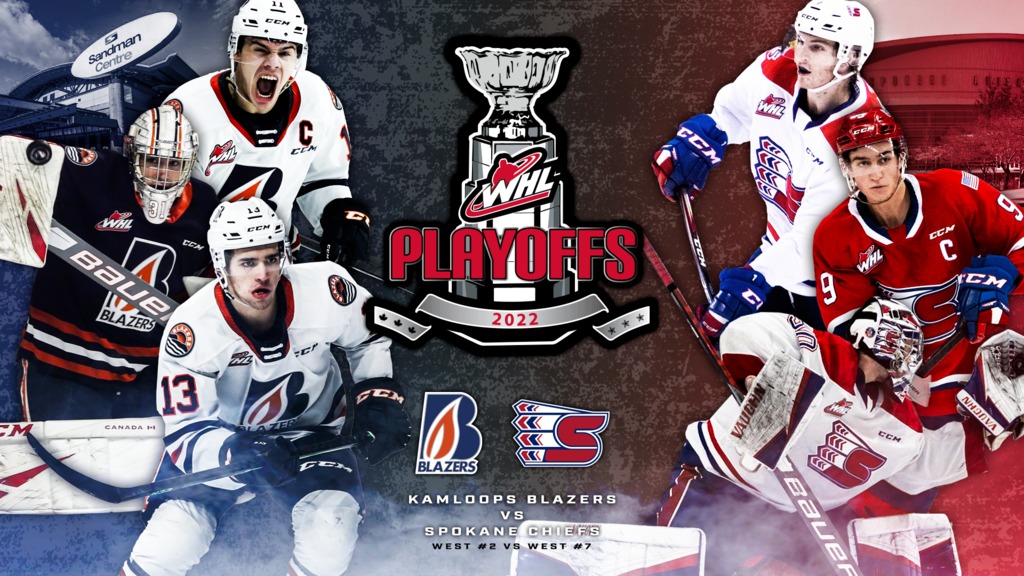 On the final night of the Western Conference schedule, the muddy waters cleared and at the end of it, the Spokane Chiefs landed in seventh place and will face the Kamloops Blazers in the first round of the 2022 WHL Playoffs.

The best-of-seven series between the Chiefs and Blazers was set after a complex tiebreaker scenario that saw three teams – the Prince George Cougars, Chiefs, and Vancouver Giants – all tied for the final three playoff positions. The three-team tiebreaker saw the Cougars into sixth place on the strength of goals differential. From there, the Chiefs and Giants place in the standings is determined utilizing a two-team tiebreaker. The Chiefs win that tiebreaker on the strength of owning the season series against the Giants with a record of 3-1-0-0.

The 2001 WHL Playoffs represents the last post-season affair between the two Clubs, with the Chiefs advancing after sweeping the Blazers in four games.

The Blazers collected the season series in 2021-22, going 2-1-0-0. But it was Spokane winning the latest meeting between the two Clubs, edging out Kamloops by a 6-5 margin on April 1.

In net, Dylan Ernst is the only Blazers netminder to appear in the season series, going 2-1-0-0 with a 2.69 goals-against average and .907 save percentage. For Spokane, Mason Beaupit earned the lone Chiefs victory during the season series.

Due to complicated facility availability in Spokane, the Chiefs and Blazers will skate through an unconventional schedule. The first three games of the series will be played in Kamloops, with Game 1 scheduled for Friday, April 22 at 7 p.m. PT (Sandman Centre). The series will then shift to Spokane for three consecutive games, with Game 4 set for Friday, April 29 at 7:05 p.m. PT (Veterans Memorial Arena).

“We think it is great that the community and the Spokane Arena get the opportunity to host an event like Paul McCartney and sometimes in a multi-use facility we run into scheduling conflicts like this. We appreciate the cooperation of Kamloops and the Western Hockey League.”