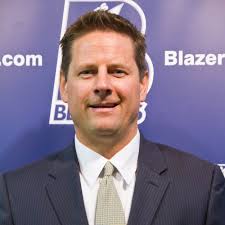 Kamloops, BC – The Kamloops Blazers Hockey Club announced today that they have accepted the resignation of Director of Sales & Marketing, Dave Chyzowski. He will join the Delta Hockey Academy as Head Coach of the Female Prep team and be the Director of Sales.

Chyzowski joined the Blazers in his current position in December 2006 after an 18-year pro hockey career. He starred for the Blazers from 1987-1990.

“We will miss Dave’s passion, drive and determination while working for our hockey club,” commented President & COO, Don Moores. “Dave has expressed a desire to coach and this will be a great opportunity for him to use his skills and knowledge. We want to thank him for his dedication to our hockey club and wish him the best moving forward.”

Chyzowski will start his new position with Delta Hockey Academy on August 1st.

The Blazers will begin the search for a replacement immediately.

Chyzowski was drafted 2ndoverall in the 1989 NHL entry draft by the New York Islanders. He was the captain of 1990 gold medal winning world junior team for Canada in Helsinki where he tallied 9 goals and 4 assists in only 7 games. After his gold medal championship, Chyzowski went on to play 18 years of professional hockey in the NHL, AHL, IHL, DEL (Germany) and EBEL (Austria) with over 1000 games played before his retirement from competitive play in 2007.

Following his professional career, Chyzowski dedicated himself to supporting the growth of the Kamloops Minor Hockey Association as a coach for over 10 years while working for the Kamloops Blazers of the WHL. Chyzowski has two sons, Ryan and Nick, who play hockey for the Medicine Hat Tigers and the University of Waterloo, respectively.

“We are thrilled that Dave has committed to a long term position with our Female Prep team,” said Gallagher. “His hockey knowledge, experience and passion for coaching will be a great asset to the elite level of play that our girls have achieved.” Chyzowski will be joined on the bench by assistant coach Kate Wheeler [Quinnipiac University ‘12] who has been with the Female Prep team since its inception in 2017.

“Dave’s energy and excitement for this new role will be huge for the growth and development of our female program. We are looking forward to having him on the bench for many years,” said Director of Female Hockey and Business Operations, Owen Pighin.

Gallagher thanked the Kamloops Blazers organization for their cooperation through the transition.