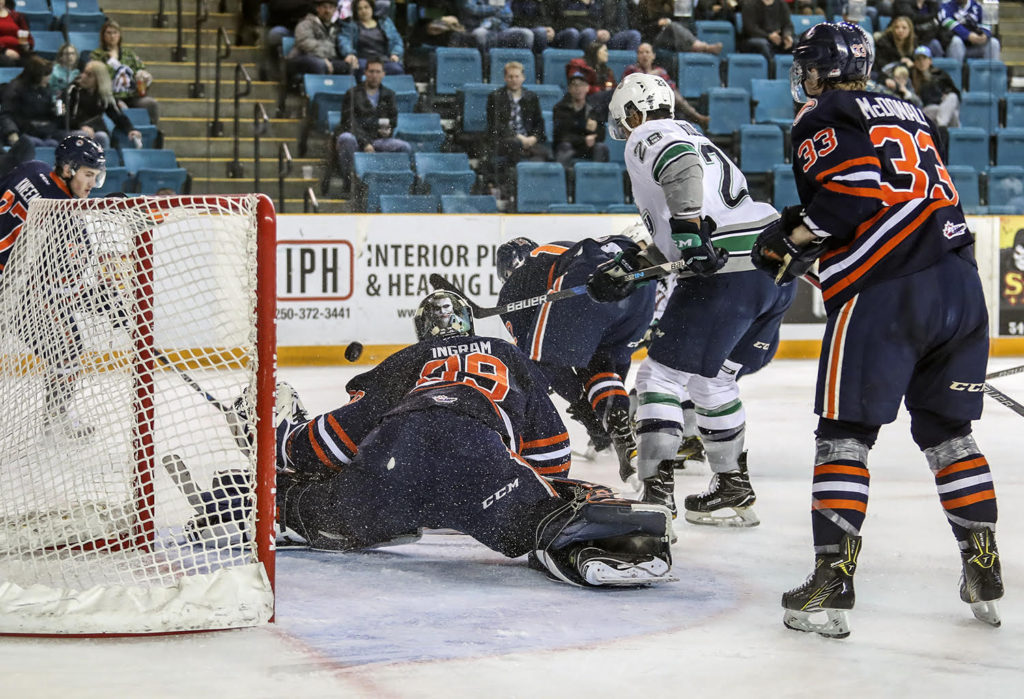 Connor Ingram had a special night between the pipes as he made 52 saves to lift the Blazers to a 4-3 overtime win over the Seattle Thunderbirds Wednesday night.

The Blazers started off great scoring 17 seconds into the game. Garrett Pilon fed Rudolfs Balcers on the rush for a 1-0 lead.

It was all Thunderbirds from there, as they outshot the Blazers 18-5 in the period. Ingram made a ton of great stops to keep it close.

The T-Birds finally cracked Ingram as Ethan Bear was there on a rebound to score his eighth goal of the season and make it 1-1 through the first period.

The T-Birds continued to pounce on the Blazers in the second period. Mathew Barzal gave them the lead on a rebound to make it 2-1.

With all the momentum on the Thunderbirds side, Ingram continued to keep the game close as the Blazers were outshot 20-4 in the second period.

Deven Sideroff gave the Blazers hope as Rudolfs Balcers created a turnover while shorthanded and Sideroff rifled a shot past goaltender Matt Berlin to tie the game at 2-2 with 53 seconds left in the second period.

That momentum carried on into the third period as Garrett Pilon found Spencer Bast off the bench and Bast scored his fourth goal of the season to give the Blazers a 3-2 lead.

Ryan Gropp tied the game up on a power play. He took a great pass from Barzal and potted his sixth goal of the season to make it 3-3.

The Blazers stuck with it and earned themselves a power play late in the game.

The game went to overtime and Deven Sideroff was the hero. His shot beat goaltender Matt Berlin and lifted the Blazers to a 4-3 win.

Connor Ingram was outstanding for the Blazers on the night. Head Coach Don Hay said “it was one of the best goaltender performances I’ve seen in the WHL.”

Ingram stopped 52 of 55 shots on the night, as the Blazers were outshot 55-21. The Blazers finished the night 1-for-2 on the power play, while the Thunderbirds were 1-for-5.

The Blazers improved to 15-12-1-0 on the season. The Blazers are home for games this weekend as they host the Vancouver Giants on Saturday, December 3rd for “Teddy Bear Toss Night” and the Brandon Wheat Kings on Sunday, December 4th.