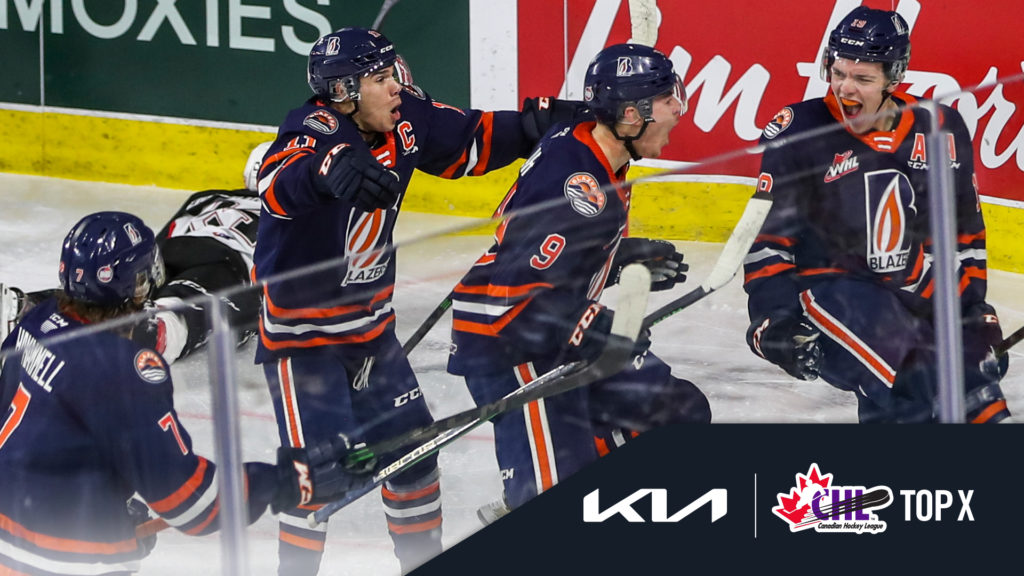 The Quebec Remparts cannot be dethroned. Retaining the No. 1 spot in the Kia CHL Top-10 Rankings for the second consecutive week, Quebec wrapped up their recent schedule with two more victories in which the team combined for 15 goals, pushing their win streak to eight straight and giving the squad an astounding 8-1-0-0 record. Coming away with a 6-2 win against then ranked Blainville-Boisbriand on Friday, veteran forward Zachary Gravel pushed the pace for the Remparts as one of six skaters to finish with a multi-point effort en route to the victory. Two nights later, it was Columbus Blue Jackets draftee James Malatesta leading the way for his squad as he scored twice and added one assist, making him one of four skaters to close out the contest with three or more points. Culminating in a 9-4 victory versus Chicoutimi, the Sunday showdown was highlighted by seven unanswered markers in the second half. Along the way, undrafted centre Theo Rochette posted back-to-back two-point performances, marking eight of nine contests this year in which he has found the scoresheet as he now assumes the QMJHL scoring lead with 17 points. Meanwhile, the Remparts also continue to be nearly unbeatable in their own end, headlined by rookie netminder William Rousseau who owns a dazzling .949 save percentage and 1.30 goals-against average across three appearances.

After the Remparts, also earning recognition from the QMJHL in the Week 4 edition of the Kia CHL Top-10 Rankings is the Acadie-Bathurst Titan, who in the seven slot make the list for the fourth time this season, as well as the Rimouski Oceanic at No. 9 and the Shawinigan Cataractes as an honourable mention.

Out west, the Winnipeg ICE continue to topple the opposition, having won all nine of their games by a combined plus-41 margin. The ICE’s offensive arsenal was most recently displayed Saturday where despite trailing 4-1 to Moose Jaw midway through the final frame the ICE rallied for four goals in just over eight minutes, with three of the tallies coming at even strength and the eventual game winner notched with just 45 seconds remaining to keep their perfect record intact. That incredible comeback came just three days following a drubbing of the same squad in which Winnipeg reached double-digit tallies for the second time this season. In all, the Wednesday contest saw the ICE pour on the offense in the third period as they found the back of the net seven more times. Up front, the ICE are seeing a breakout performance from diminutive centre Matthew Savoie, a projected early selection in the upcoming NHL Draft who is currently riding a seven-game point streak in which he has collected six goals and seven assists for 13 points.

Beyond the ICE, also impressing from the WHL is the Edmonton Oil Kings who have found the win column in three of their last four outings underscored by a 5-4 win versus rival Medicine Hat that saw Arizona Coyotes prospect Dylan Guenther shift to centre before wrapping up the night with a pair of points including the eventual game winner. Also earning recognition from the WHL is the Kamloops Blazers and Everett Silvertips – each with six wins apiece – as well as the Saskatoon Blades who make the list for the first time this season as an honourable mention.

In the OHL, the London Knights advance to No. 4 after remaining undefeated through six contests, with their most recent victory coming Friday when they downed rival Owen Sound for the third time this season. In all, the Knights continue to see impressive early returns from Nashville Predators up-and-comer and newly minted captain Luke Evangelista who led the way in Friday’s affair with two points highlighted by a shorthanded marker coming early in the final frame that stood as the game-winning goal. Meanwhile, 2002-born netminder Brett Brochu continues to turn aside the opposition, having allowed just 14 goals through the six contests, giving him a .931 save percentage and 2.25 goals-against average that both rank amongst the league leaders.

Rounding out the latest list, the second-slotted team from the OHL is the Kitchener Rangers who have surrendered a lone loss through six contests to come in at No. 8 in the Week 4 rendition of the Kia CHL Top-10 Rankings, while the Kingston Frontenacs at 10th and the Ottawa 67’s as a new honourable mention also earned recognition.