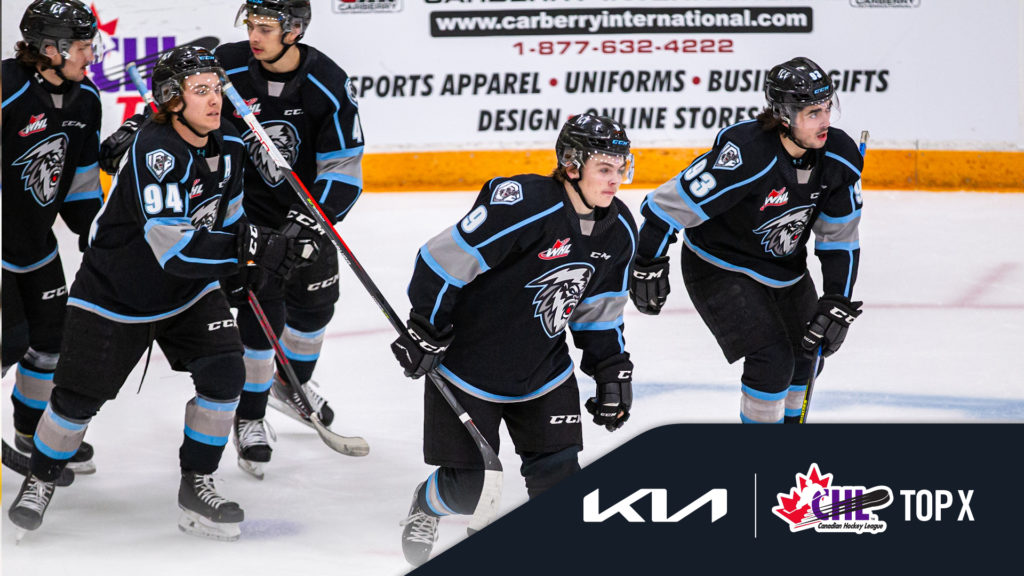 For the third week running, the Winnipeg ICE are the top team in the circuit following a seven-day stretch in which the squad came away victorious three times to push its win streak to six games and improve to a CHL-best 34 points through 18 appearances.

Making noise beyond the ICE however is the Everett Silvertips who remain undefeated through 13 showings, with the club’s lone imperfect game coming in a shootout loss to rival Portland in late October. For the Silvertips, leading the way is Czech centre Michael Gut who despite being limited to 10 appearances has picked up a team leading 15 points counting three goals and 12 assists. Facing rival Tri-City on Friday, Gut set up three goals to match a season single-game high of three points to help his squad to a 6-0 victory on home ice. In all, the Silvertips are getting offensive support from all corners, already with six players with double-digit production, a group that includes a pair of NHL drafted defenceman in Ronan Seeley (Carolina Hurricanes) and Olen Zellweger, both of whom have recorded three goals and seven assists on the season. Meanwhile, the always sound Silvertips continue to get it done between the pipes where netminders Braden Holt and Koen MacInnes have formed a fantastic tandem in combining for a league-low 20 goals against. In all major categories, the pair has put up near identical performances, giving Everett a chance to win any night. Tune in Friday on CHL TV as the Silvertips head to Vancouver to take on the Giants where they will look to push their undefeated in regulation streak to 14 games.

Also earning recognition from the WHL is the No. 4 ranked Kamloops Blazers whose week counted back-to-back victories versus Vancouver after surrendering a hard-battled 3-2 decision versus rival Kelowna, while the Edmonton Oil Kings come in at No. 5. Picking up at least one point in each of their past five outings, the Oil Kings have reason for added optimism following the recent return of left-wing Jake Neighbours who had begun the year with the St. Louis Blues. Making his season debut Friday versus Regina, Neighbours made the most of it in registering two assists en route to a 6-3 road win. Lastly, rounding out recognition from the WHL is the Seattle Thunderbirds, who earn honourable mention after picking up three of four points on the week to improve to 10-3-1-0.

From the OHL, atop the pack is the London Knights who picked up a pair of weekend victories in which the squad amassed 14 goals before falling short to Sarnia on Tuesday. Picking up a pair of markers in Sunday’s 7-4 take down of the Erie Otters was Dallas Stars draftee Antonio Stranges, part of a three-point effort that marked his third-straight contest in which he has finished with multiple points. Providing invaluable secondary scoring support, Stranges plays with a shoot-first mentality – he has notched at least four shots on goal in all nine of his appearances – and sits sixth in team scoring with 10 points. Meanwhile, the recent weekend set also saw the Knights get good looks from a pair of freshmen forwards in left-wing Brody Crane and centre Denver Barkey, with each picking up three points in the big win over the Otters. Chosen by the Knights in the opening round of the 2021 OHL Priority Selection, Barkey used the opening weeks of the season to get up to speed with the junior ranks and has found his offensive footing this month.

Also continuing to climb the ranks is the Ottawa 67’s who after earning honourable mention the week prior clock in eighth in the Week 7 edition of the Kia CHL Top-10 Rankings. With victories in four of their past six outings – part of a stretch in which the team has collected nine of a possible 12 points – the 67’s have improved to second best in the OHL with a 10-5-0-1 record, good for 21 points and just two back of London for top spot. After falling short to Mississauga on Friday, Ottawa then rebounded with big victories over Hamilton and Oshawa, highlighted by Saturday’s 6-3 decision over the Bulldogs that saw the 67’s rally for four goals in the final frame. Netting the winner for Ottawa was Russian centre Vsevolod Gaidamak as part of a two-point effort that he then followed up with two more goals plus an assist Sunday versus the Generals. Ottawa’s top selection from the 2020 CHL Import Draft, Gaidamak has had little difficulty in adjusting to North American ice where through 16 games he has collected 18 points, good for second in team scoring and a lone point behind fellow centre Cameron Tolnai for top spot.

Rounding out recognition from the OHL is the 10th place Kingston Frontenacs who after falling to Oshawa on Friday rebounded the next night before a national audience in which 2022 NHL Draft headliner Shane Wright stole the show with the shootout winner to come out on top 5-4 versus Mississauga. Lastly, the honourable mention Soo Greyhounds continue to be an offensive force with an OHL-leading 73 goals on the season headlined by overage left-wing Tye Kartye who has netted 15 goals in as many appearances, good for top spot in league goal scoring alongside Guelph’s Sasha Pastujov.

Leading the way from the QMJHL is the sixth-ranked Sherbrooke Phoenix, winners of seven straight including a perfect week that counted a trio of victories underscored by an 8-1 drubbing of Blainville-Boisbriand in which left-wing and Montreal Canadiens prospect Joshua Roy pushed the pace with one goal and three assists to mark the second contest this season where he has recorded four points. Currently riding a seven-game point streak, that stretch has seen Roy amass five goals and nine assists for 14 points, while his 30 points on the season sit tied for top spot league wide with Shawinigan forward and Edmonton Oilers draftee Xavier Bourgault. For the Phoenix, while it is Roy pushing the pace offensively, the team is also receiving solid offensive support from overage captain Xavier Parent with 26 points through 15 games on the season including 10 points in his last four outings as well as first-year blue-liner David Spacek who has collected 19 points in 16 games, good for third-best among his QMJHL rearguards.

Meanwhile, the Charlottetown Islanders continue their winning ways with victories in their last three, all part of a stretch in which the squad has picked up at least one point in nine of its past 10 outings. In all, weekend action saw the club pick up road wins over Cape Breton and Halifax, with the latter marked by two goals with under five minutes remaining to stave off extra time and come away with a 6-4 win against the Mooseheads. Also joining the Week 7 rendition of the Kia CHL Top-10 Rankings is the Rimouski Oceanic who rank ninth following back-to-back victories, helping the club to improve to 11-4-1-1 on the season, good for 24 points and top spot in the QMJHL’s East Division. In all, the Oceanic sit two points north of the honourable mention Quebec Remparts whose mixed bag weekend saw them topple Baie-Comeau by a 6-1 score Friday only to fall short by the same margin two nights later.