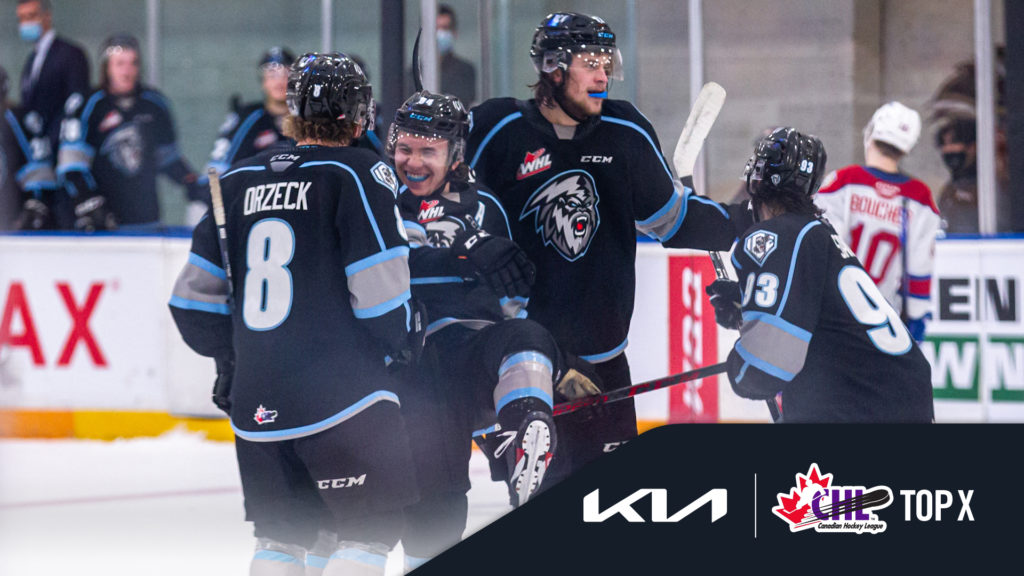 The Winnipeg ICE cannot be dethroned. Leading the Kia CHL Top-10 Rankings for the seventh time this season, the week in Winnipeg saw the ICE twice host the loaded Oil Kings, coming away with the victory in the latter of the two contests. Following a hard-battled 3-2 final on Wednesday, the ICE were back to their winning ways three nights later as the team’s dynamic duo of 2022 NHL Draft eligibles impressed in leading the team to victory. In all, undersized centre Matthew Savoie closed out the contest with three points – including the eventual game-winning goal – to further cement his spot atop the WHL scoring race with 44 points in 27 games. Meanwhile, fellow pivot Conor Geekie also got his name on the scoresheet, netting his ninth goal of the season to bring him to 34 points through 27 appearances.

Despite coming away with a lone victory on the week, the Edmonton Oil Kings impressed in taking two points from top-seeded Winnipeg, a contest in which Montreal Canadiens prospect Kaiden Guhle – a new addition to the Alberta capital – played the hero in netting his first goal as a member of the Oil Kings and the eventual game winner with under seven minutes remaining in the final frame. One of a CHL-leading four members absent from the Oil Kings as he joins Team Canada at the World Juniors, alongside Guhle that group includes forwards Dylan Guenther (Arizona Coyotes) and Jake Neighbours (St. Louis Blues) as well as netminder Sebastian Cossa (Detroit Red Wings).

Coming in at No. 5, the Kamloops Blazers picked up a key victory over B.C. Division rival Vancouver in coming away with a 7-1 triumph after falling short to the same squad just five nights earlier. Leading the way to victory for the Blazers was captain Logan Stankoven, a Dallas Stars draftee who picked up a trio of points on the man advantage, while between the pipes goaltender Dylan Garand (New York Rangers) turned aside 20 shots to record his 15th win of the season. A Victoria native, Garand is now competing for top-job duties as part of Team Canada at the upcoming World Juniors.

Lastly, the eighth-ranked Everett Silvertips earn a spot in the Kia CHL Top-10 Rankings for the eighth time this season. Coming away with a key victory versus Kelowna, leading the charge was Finnish-born right-wing and Tampa Bay Lightning prospect Niko Huuhtanen who picked up his second two-goal game of the month en route to a 5-3 win. Meanwhile, from the WHL in the honourable mention category is the Seattle Thunderbirds who came away with a pair of road victories over Kamloops and Kelowna to make it seven-straight contests in which the club has picked up at least one point. Standing 16-6-3-0 on the season, the Thunderbirds are now just five points shy of top spot in the WHL’s Western Conference.

Leading the way from the OHL is the surging Kingston Frontenacs who have won eight straight including a perfect 3-0 weekend in which the squad secured victories over Hamilton, Niagara, and Mississauga. With Shane Wright out of the lineup and in attendance at World Juniors selection camp, the main offensive duties were left to overage forwards Lucas Edmonds and Jordan Frasca, with the former dominating to the tune of four goals and eight assists through three appearances to move into top spot in OHL scoring with 52 points over 25 contests. With the victories, the Frontenacs climbed to first in the OHL’s Eastern Conference, now sporting a 17-5-3-0 showing and 37 points.

At No. 8, the North Bay Battalion split the week in coming away with three points in as many games including a 5-4 overtime thriller versus the Soo in which the club rallied to tie the game with less than four minutes remaining, courtesy of Matvey Petrov’s 17th goal on the season before newly minted San Jose Sharks signee Brandon Coe capitalized early in the extra frame. Overall, it was a red-hot week for Petrov who two nights later lit the lamp two more times, where his now 19 goals are outpaced by just three OHL skaters.

Lastly, the London Knights earn recognition in the Kia CHL Top-10 Rankings for an OHL-leading 10th time this season, coming in at No. 10. Despite coming up short on the week in showdowns versus Windsor and Guelph, the Knights maintained first overall in the OHL’s Western Conference thanks to a 17-7-1-0 showing and 35 points. The Knights will look to return to their winning ways Friday on home ice against Owen Sound, with puck drop set for 7:30 p.m. and available via CHL TV, where this holiday season, fans can give the gift of the game with a CHL All Access Pass. Elsewhere in the OHL, the honourable mention category sees the Mississauga Steelheads who came away with two victories in three outings, highlighted by a 9-1 takedown of Niagara that saw rookie centre Owen Beck scored three times including the hat-trick marker coming with just 13 seconds remaining in the third period.

Headlining the QMJHL, the No. 4 ranked Charlottetown Islanders wrapped up the week with two wins in three games including Saturday’s 5-3 triumph over the Sea Dogs where rookie left-wing Jakub Brabenec put up his first two-goal performance of the season. Now with 32 points through 28 appearances, the Vegas Golden Knights prospect leads all QMJHL rookies in scoring, while the Islanders have picked up points in eight of their past 10 outings to hold down first place in the QMJHL’s Eastern Conference.

Coming in at No. 7, the Sherbrooke Phoenix have gone to extra time in each of their last four outings with the past week counting a hard-battled 2-1 decision versus Gatineau that ended in a shootout followed by a 3-2 final against Blainville-Boisbriand. At the forward ranks, the Phoenix continue to see a strong performance from Montreal Canadiens up-and-comer Joshua Roy whose 45 points sit second in league scoring, while the second half of the season should see him playing with extra motivation after being among the final cuts to skate for the Canadian World Juniors.

Elsewhere, the Quebec Remparts came away with a pair of victories on the week in defeating Rouyn-Noranda and Baie-Comeau. With the wins, the Remparts stand at four-straight victories, part of a stretch in which the club has found the win column in seven of its past 10 outings. On the season, the Remparts now stand 19-9-0-0, good for 38 points and just two back of Charlottetown for tops in the QMJHL’s Eastern Conference. Meanwhile, earning honourable mention from the QMJHL is the Gatineau Olympiques who came away perfect on the week with wins over Sherbrooke and Blainville-Boisbriand, with the latter coming as a six-goal outburst that counted a five-point performance from 2022 NHL Draft prospect Antonin Verreault.