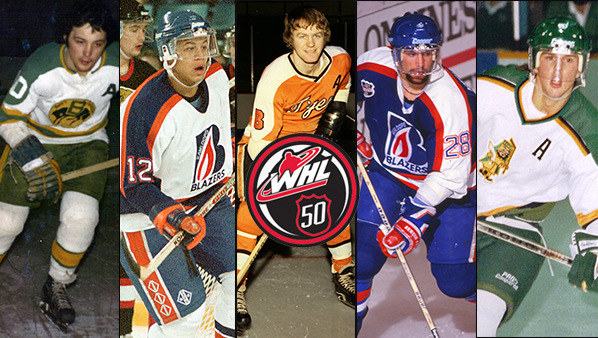 Calgary, AB – As part of the Western Hockey League’s 50th Season celebrations, a panel of historians selected the top 125 players in WHL history this past September. From this list, WHL fans voted at Top50.whl.ca to select the Top 50 WHL Players of All-Time. This week, the fan and panel voting results revealed the following placements:

The Top 50 WHL Players of All-Time countdown will conclude next Wednesday, at the 2016 WHL Awards in Calgary, as the top-three are announced.

The St. Albert, AB native played three seasons for the Kamloops Blazers from 1993 to 1996. During his first two seasons with the Blazers, the Club claimed back-to-back WHL and Memorial Cup titles. Iginla received the George Parsons Trophy for being the most sportsmanlike player in the 1995 Memorial Cup tournament. In his last season in junior hockey, Iginla tallied 136 points (63g-73a) in 63 regular season games to earn the Four Broncos Memorial Trophy as the WHL’s Player of the Year. In addition, Iginla was selected as a CHL First Team All-Star and a WHL Western Conference First Team All-Star that year. The Blazers were unable to defend the WHL crown in 1996, but Iginla won a gold medal for Team Canada at the 1996 IIHF World Junior Championship.

In his WHL career, Iginla amassed 236 points (102g-134a) in 183 career regular season games and was also a point-per-game player in the postseason with 56 points (26g-30a) in 56 games. After going undrafted in the WHL Bantam Draft, Iginla made the most of his opportunity with the Blazers and was ultimately selected in the first round, 11th overall, by the Dallas Stars in the 1995 NHL draft.

Iginla is currently in his 19th season in the NHL with the Colorado Avalanche. The majority of Iginla’s NHL career was spent with the Calgary Flames. The 38-year-old forward has collected over 600 goals and 1200 regular season points so far in his NHL career. In 2001-02, Iginla had a magnificent season as he won his first of two Maurice Richard Trophies for leading the NHL in goals, the Art Ross Trophy for the leading the NHL in points and the Lester B. Pearson Award as the NHL’s most valuable player as selected by the National Hockey League Players’ Association. The long-time captain of the Flames was also recognized for his leadership abilities on the ice as well as his contributions in the community, receiving the King Clancy Memorial Trophy in 2003-04 and the Mark Messier Leadership Award in 2008-09.

Iginla has also had a brilliant international career with gold medals for Team Canada at the 2002 and 2010 Olympics, the 1997 IIHF World Championship and the 2004 World Cup of Hockey. In the fall of 2007, Iginla became a part-owner of the Kamloops Blazers along with Tom Gaglardi and a group of other Blazers Alumni.

Niedermayer spent three seasons with the Kamloops Blazers from 1989 to 1992. Already making an impact as a 16-year-old rookie, Niedermayer put together over a point-per-game campaign from the backend with 69 points in 64 regular season games. Niedermayer then notched 16 points in the 1990 WHL Playoffs to help Kamloops win the League title. The Cranbrook, BC native was recognized for his work off the ice the following year as he was the recipient of the Canadian Hockey League and WHL Scholastic Player of the Year Award in 1990-91 after an 82-point campaign. During that season, Niedermayer also won a gold medal for Team Canada at the 1991 IIHF World Junior Championship.

Niedermayer finished off his WHL career by winning his second WHL title and capturing the first Memorial Cup in the Blazers’ franchise history in 1992. The defenceman capped off an outstanding Memorial Cup tournament by assisting on the game-winning goal by Zac Boyer with only 14.6 seconds left in the championship game. Subsequently, Niedermayer was awarded the Stafford Smythe Memorial Trophy as the most valuable player in the tournament. In addition, Niedermayer was named a Memorial Cup All-Star and a CHL First Team All-Star that season as well as a WHL Western Conference First Team All-Star for the second year in a row.

At the conclusion of his WHL career, Niedermayer had accumulated 190 points (47g-143a) in 156 career regular season games and 39 points (11g-28a) in 34 playoff contests. Following his success in Kamloops, Niedermayer was selected third overall in the 1991 NHL Draft by the New Jersey Devils.

His NHL career lasted 17 years including 12 seasons with the Devils before ending with the Anaheim Ducks. When Niedermayer retired in 2010, he had registered 740 points (172g-574a) in 1263 regular season games and recorded 98 points (25g-73a) in 202 playoff contests. Over his illustrious career, Niedermayer raised the Stanley Cup a total of four times including three with the Devils (1995, 2000 and 2003). In his 2007 Stanley Cup victory with the Ducks, Niedermayer was awarded the Conn Smythe Trophy as the MVP of the Stanley Cup Playoffs. Niedermayer also collected a James Norris Memorial Trophy as the NHL’s best defenceman in 2003-04.

Niedermayer is a member of the elite Triple Gold Club. In addition to winning the Stanley Cup, Niedermayer won two Olympic gold medals in 2002 and 2010 as well as a World Championship gold medal in 2004 with Team Canada. For all his accomplishments in his distinguished hockey career, Niedermayer was inducted into the Hockey Hall of Fame as part of the 2013 class. In addition, his jersey has been retired by the Kamloops Blazers and New Jersey Devils.