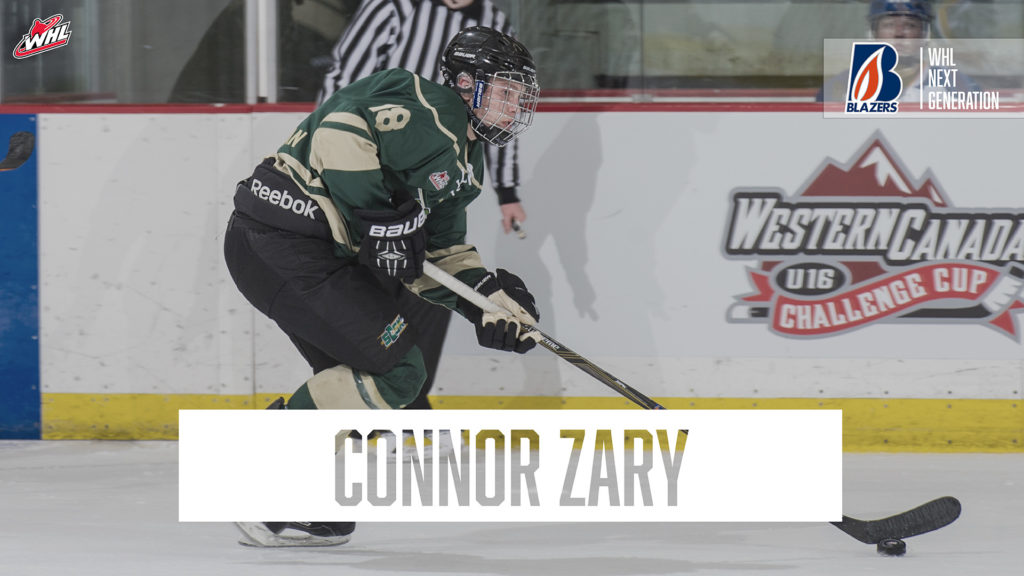 WHL Next Generation is a 22-part series highlighting a handful of the future stars of the Western Hockey League. From first-round bantam draft picks to later-blooming selections, get to know the names of players set to establish themselves as the newest crop of exciting talent to grace the WHL. From August 1 through September 11, get the inside scoop on the incoming crew of 16-year-olds.

It was one heck of a season for Kamloops Blazers prospect Connor Zary.

Since hearing his name called by the Blazers in the second round, 37th overall at the 2016 WHL Bantam Draft, the Saskatoon product has had his share of exciting hockey experiences.

“I feel like my year went pretty well. I had a small injury that kept me out a little bit but other than that it started off well and ended pretty good too,” said Zary, who recently finished his first year of Midget hockey with the Saskatoon Contacts of the SMHL.

The 5-foot-11, 166-pound winger didn’t see any regular season WHL ice time with the Blazers last season, but he had the furthest thing from a quiet season in the Midget ranks.

Zary raised some eyebrows in 2015-16 when he posted 81 points (44 goals, 37 assists) in 30 games with the Saskatoon Outlaws Bantam AA club, and expectations were high for the dynamic young forward coming into his first year of Midget AAA hockey.

After kicking off the 2016-17 season with a solid performance at Blazers rookie camp, Zary joined the Contacts and proceeded to finish 12th overall in league scoring with 45 points in 36 games.

He also finished fourth in league goal scoring with 27.

But while the 15-year-old said he was proud of how he played during the regular season, the true highlight of the year, and of his young hockey career, was his performance at this year’s Mac’s AAA Midget Tournament.

“I feel like it went really well, especially going into the big tournaments like the Mac’s. I felt like I played good there and then throughout the season just stayed pretty consistent,” he said.

Potentially the toughest Midget club-team tournament in the world to win, the Mac’s takes place in Calgary every year from Dec. 26 to Jan. 1 and features 25 teams from all over Canada, the U.S. and Europe.

After dropping their first game of the tournament 5-2 to the Austrian National U18 team, Zary and the Contacts went on a tear through the rest of the pool round to earn themselves a spot in the knockout round.

From there the momentum continued as Zary helped lead his team past the Notre Dame Hounds and CFR Chemical Bisons to book a spot in the Mac’s tournament final against the Belarus National U18 team.

Goal! #7 Connor Zary scored for Saskatoon Contacts making it 2-0 against the CFR Chemical Bisons in the 2nd period

“That was a lot different. Just their style of play and their systems and what they would incorporate into their games – it was a lot different being able to see that,” said Zary, who led his team in scoring with 11 points (five goals, six assists) in seven games at the tournament.

Unfortunately, that was as close as the Contacts would get to lifting the Mac’s trophy as they fell 6-1 to Belarus on the Scotiabank Saddledome ice.

Still, Zary said the experience of playing in the final of one of the most prestigious tournaments in the world is one that he’ll never forget.

“It was a really cool experience, especially. Our team played really good and it was really easy to feed off, so it was probably one of the cooler hockey experiences I’ve ever had in my life,” he said.

The Mac’s wasn’t the only tournament Zary had the opportunity to showcase his skills in last season.

Earlier in the year the self-described playmaker suited up for Team Saskatchewan at the 2016 U16 Western Canada Challenge Cup in Calgary.

Even though his team finished in fourth place, Zary said it was good being able to play with guys from all over the province.

“It was different playing with a lot of guys spread out. I wish we could have played a little bit better but it happens sometimes. You just try to move on,” Zary said.

In addition to representing his province on the national stage, the left-shooting winger also donned the maple leaf logo as he attended Hockey Canada’s U17 Summer Development Camp in Calgary earlier this month.

Thanks @HockeyCanada for a great week. Great experience that made me a better player on and off the ice. #saskproud #teamblue pic.twitter.com/bTUhIs3MLQ

“It’s a really exciting opportunity for me and it’s kind of hard to describe. It’s just really cool,” Zary said.

Now the young forward is hoping to take everything he learned over the past season and apply it to securing a full-time roster spot with the Blazers this season.

“If I play my game, work hard. Just try to put the puck in the net as much as I can, really and just work hard at a 200-foot game,” Zary said, adding that he wants to thank his parents and everybody who has helped him get to this point in his career.

Zary and the Blazers kick off the 2017 WHL Pre-Season on Sept. 1 when they take on the Victoria Royals at 7 p.m. PDT at MacArthur Island Sports Complex.