BLAZERS BACK AT IT IN EVERETT TONIGHT 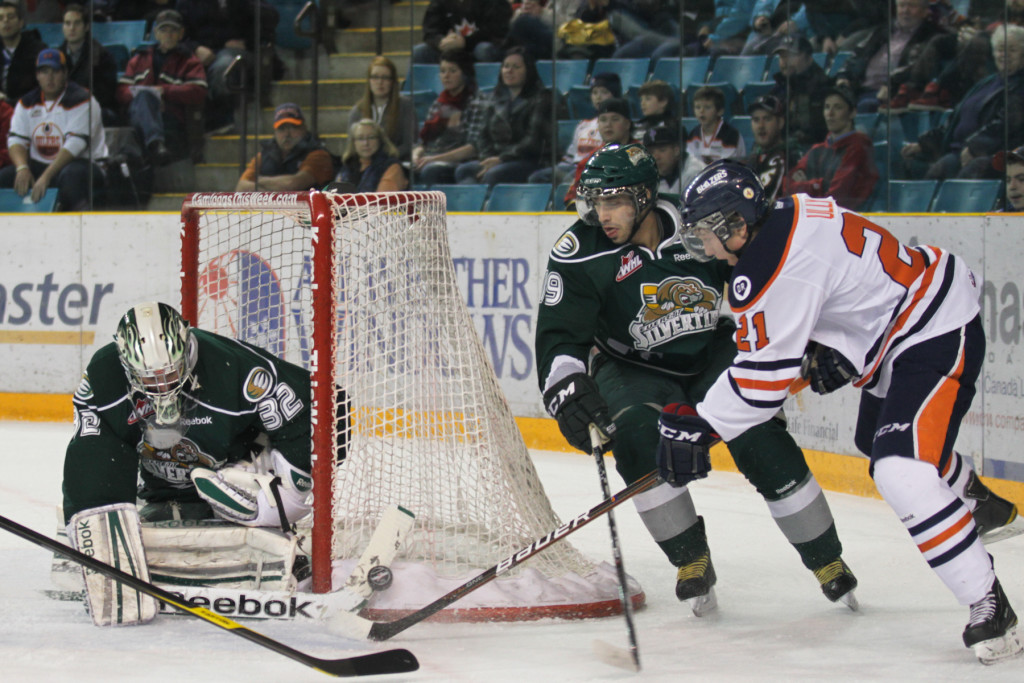 ENJOYING LIFE UP TOP: The Kamloops Blazers have started the 2012-13 season with a 15-0-0-1 record. The Blazers have won their last 13 games by a combined score of 65-25. The hockey club finished three games in three nights last weekend winning all three games. The Blazers won 8-1 over Brandon on Friday and 5-2 over Victoria on Saturday with both games on home ice. The Blazers were in Seattle on Sunday and won 4-3 in overtime. The Blazers are in a stretch of playing six games in eight nights.  Following tonight’s game in Everett, the Blazers will be in Kelowna on Thursday, November 1st and at home to Prince George on Friday, November 2nd.  The Blazers will have the weekend off before hosting Edmonton on Tuesday, November 6th and then embarking on another weekend of three games in three nights where they will play in Spokane, Tri-City and Portland.

ROSTER BREAKDOWN: The Blazers roster currently sits at 24 players (2 goaltenders, 8 defensemen and 14 forwards). The roster includes 11 players selected in the WHL Bantam Draft, eight players from the free agent list, five players via trade, and one player selected from the CHL Import Draft. The roster breakdown by region includes eight players from Alberta, seven from B.C., four from Saskatchewan, three from Manitoba, one from the USA, one from the Czech Republic, and one from Switzerland. There are 17 WHL veterans on the roster and seven WHL rookies. Four of those rookies spent time with the Blazers throughout the regular season and playoffs last season.

THE MATCH UP: The Blazers and Silvertips are meeting for the first time this season. Last year, the Blazers took all four games of the season series winning a rare game on February 29th in Everett. These two teams will meet four times this season, with the other three meetings coming after Christmas. The Silvertips are in Kamloops on January 23rd and February 7th. The Blazers will make their final trip to Everett on February 2nd.

KAMLOOPS BLAZERS ‘Who to Watch’: The Kamloops Blazers forward crop is arguably among the best in the WHL. The return of 20-year-old Brendan Ranford (7+16=23) is a big help for the Blazers. Ranford has led the Blazers in scoring the last two seasons with 86 points in 2010-11 and 92 in 2011-12.  Ranford is joined by the trio of Colin Smith (13+25=38), Tim Bozon (14+15=29), and JC Lipon (15+24=39). Smith is the center with Bozon patrolling the left side and Lipon on the right side. The Blazers also have 20-year-olds Dylan Willick (6+8=14) and Jordan DePape (3+2=5) up front. Both players are veteran 20-year-olds who have recorded 20+ goal seasons and averaged just under a point a game. DePape is returning after a six game absence due to injury. A pair of 17-year-olds have taken on a bigger role and shown they are capable of handling it in the early stages of the season. Cole Ully (6+5=11) and Matt Needham (3+4=7) both had terrific rookie seasons and are providing offensive depth to the hockey club. Chase Souto (1+3=4) is an 18-year-old into his third year with the team. The depth continues as Aspen Sterzer (1+1=2) and Rob Trzonkowski (2+1=3) can skate and contribute in many different ways for the Blazers when needed. Both are veteran players who love to take the body on the forecheck. Add in rookies Brayden Gelsinger (0+0=0), Aaron Macklin (0+1=1) and Mitch Friesen (0+0=0), and the Blazers boast a formidable group of forwards. The Blazers have five WHL veterans on defence and have three rookies on the back-end. A trio of 19-year-old defensemen lead the way as Tyler Hansen (1+8=9), Marek Hrbas (1+8=9), and Sam Grist (2+5=7) provide different dynamics to the back-end. Hansen was among the league leaders in +/- last season and is looked upon to shut down the opposition’s top players. Grist and Hrbas are expected to play in all situations. Two 18-year-olds have stepped up their game this season as Tyler Bell (0+1=1) and Landon Cross (1+6=7) are both into their second seasons. Jordan Thomson (1+4=5) has had a great start to the season. The 16-year-old is a smart and steady presence for the Blazers. Josh Connolly (0+1=1) and Ryan Rehill (0+1=1) continue to develop and improve day in and day out. In goal, the Blazers are strong as Cole Cheveldave (10-0-0-0, 1.95, .926) stats prove. 18-year-old Taran Kozun (5-0-0-1, 2.53, .915) is the back-up. Kozun has already got his feet wet with some playing time early on this season and he has been sharp already recording his first WHL shutout.

EVERETT SILVERTIPS ‘Who to Watch’: The Silvertips are coming off a year in which they finished 8th in the Western Conference. The Silvertips are led by 19-year-old defenseman Ryan Murray. Murray was the second overall selection to Columbus in the 2012 NHL Draft. The team captain played for Team Canada at both the World Championships and the World Junior Championship. Landon Oslanski is a 20-year-old defenseman who has put up 12 points already this season. Others on the back end include 20-year-old Connor Cox, rookie import Mirco Mueller, Nick Walters and Ben Betker. Up front, the Silvertips have a good mix up front of veterans and young players. Joshua Winquist and Manraj Hayer are veteran players who have put up a point per game early on this season. Reid Petryk and Kohl Bauml have chipped in offensively with five and six goals apiece. Rookies Tyler Sandhu and Ty Mappin have performed well early on for the ‘Tips. Others up front include 20-year-old Ryan Harrison, Trent Lofthouse, Stathis Soumelidis, Carsen Stadnyk, Cole MacDonald, Lucas Grayson and Dawson Leedahl. In goal, the ‘Tips have gone young as 17-year-old Austin Lotz and 18-year-old Daniel Cotton have been splitting the duties. Cotton has played well with six wins this season after a year as a back-up in Seattle last season.

DID YOU KNOW… Rob Trzonkowski is the first Blazer to ever wear #37… First year defenseman Jordan Thomson is among the WHL rookie leaders with a +9 rating this season… JC Lipon leads the Blazers and the WHL in scoring with 15 goals, 24 assists and 39 points… Forwards JC Lipon and Colin Smith have both been named to Team WHL for the Subway Super Series versus Russia in November… Dylan Willick takes over the Blazers current iron man streak playing in his 203rd consecutive game tonight after Bronson Maschmeyer played in 216 consecutive games to finish his junior career… Brendan Ranford is the longest serving Blazer and has played 292 WHL games and has 293 points all with the Blazers which puts him 10th in Blazers all-time scoring after passing Robin Bawa’s 287 points… Goaltender Cole Cheveldave is among the WHL leaders in all goaltending categories with a perfect 10-0-0-0 record, 1.95 goals against average and a .926 save percentage… Ranford needs to play 48 more games this season to surpass C.J. Stretch’s record of 341 career games in a Blazer uniform… Colin Smith, Tyler Hansen and Dylan Willick are the Blazers Alternate Captains, with a Captain yet to be named… The Blazers boast four players in amongst the top eight WHL scorers in JC Lipon (1st – 39 points), Colin Smith (2nd – 38 points), Tim Bozon (3rd – 29 points), Brendan Ranford (8th – 23 points)… The Blazers have won 13 straight games which ties a franchise record set in 1989-90 and 1986-87… JC Lipon has 32 points in his last 12 games, including 15 goals… Colin Smith is riding a season opening 16-game point streak in which he has compiled 35 points… The Blazers have 10 different players who have scored the game winning goal in 15 wins so far this season.