BLAZERS EARN 20TH WIN OF THE SEASON 2-1 OVER GIANTS 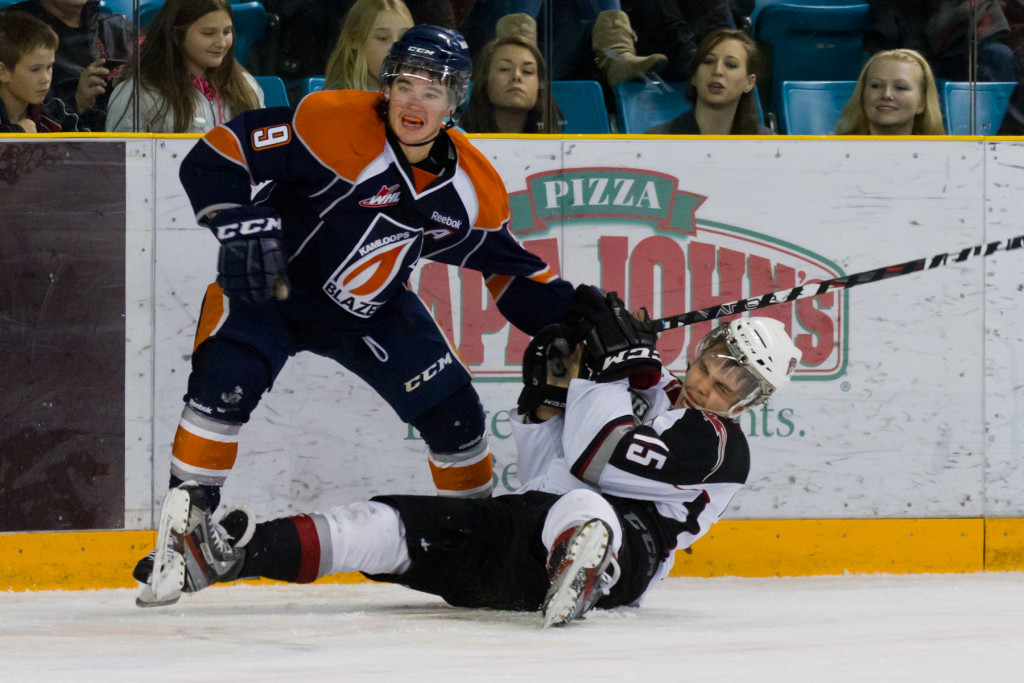 The Blazers (20-6-1-1) protected a third period lead as they held off the Vancouver Giants (7-17-0-0) for a 2-1 home ice victory. The Blazers were led by 19-year-old Colin Smith who had the Blazers two goals and goaltender Cole Cheveldave who had a bounce back game with 26 saves in goal.

The first period was scoreless with few scoring chances either way. The Giants held a slight lead on the shot clock with a 9-6 advantage in the period.

The Blazers had more energy in the second period and scored the game’s first goal on the power play. Brendan Ranford gave it to JC Lipon who gave a pass to Colin Smith down low. Smith walked to the net and stuffed it home for his 18th goal of the season. Cole Cheveldave, who was solid for the Blazers, turned aside Kale Kessy who had a shorthanded breakaway in the period. Smith added to the Blazers lead as he potted a rebound off a shot from Tim Bozon to make it 2-0 Blazers heading into the third period.

Everything was going smooth for the Blazers in the third period until a rush turned into an own goal. Carter Popoff’s attempted pass went off a Blazer backchecker and into the net to cut the lead to 2-1 with 9:04 to go in the game. Cole Cheveldave was counted upon to make a couple big saves for the Blazers as they staved off the Giants to earn their 20th victory of the season.

JC Lipon added to his WHL scoring lead total with two assists for the Blazers. Lipon now has 53 points, while Colin Smith is second in the WHL with 52 points.

The Blazers will enjoy the week off after playing 28 games this season, which is the most in the WHL. The Blazers will close their home stand next weekend as they host the Tri-City Americans on Friday, November 30th and the Moose Jaw Warriors on Saturday, December 1st.

Following the game, the Blazers re-assigned 17-year-old forward Brayden Gelsinger. Gelsinger was pointless in 12 games with the Blazers this season. This transaction puts the Blazers roster at 24 player including 14 forwards, eight defensemen and two goaltenders.