BLAZERS ON ROAD AGAIN IN VANCOUVER 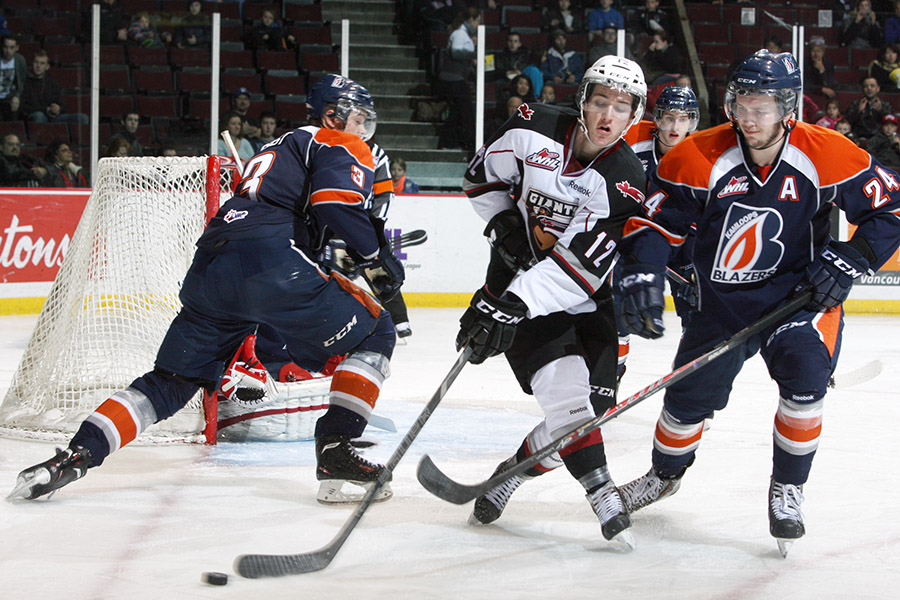 ON THE ROAD: The Kamloops Blazers are into their 33rd season in the Western Hockey League and the 30th season as the Kamloops Blazers. The Blazers have a 13-48-2-3 record through 66 games. The hockey club played 14 of 16 games on home ice between January 11th and February 15th. The Blazers are on a stretch of 10 straight road games. The road trip has taken the Blazers to the USA and Alberta. It will finish off in Victoria this weekend. The Blazers started their road trip playing three games in three nights last weekend in Portland, Seattle and Spokane. They then headed to Alberta for three games in Red Deer, Calgary and Medicine Hat. The Blazers are 1-6-0-0 on the 10-game road trip so far with the lone win coming in Seattle via the shootout. The Blazers will be in Victoria Friday and Saturday to close out 10 straight games on the road. The Blazers home rink, the ISC, is being occupied with the Canadian Men’s Curling Championships from March 1st – March 9th. The Blazers will conclude their season next week with home games against Kelowna and Prince George and a lone road game in Prince George.

ROSTER BREAKDOWN: The Blazers roster currently sits at 25 players (3 goaltenders, 8 defensemen and 14 forwards). The roster includes 10 players selected in the WHL Bantam Draft, one player from the free agent list, 12 players via trade, and one player selected from the CHL Import Draft. The roster breakdown by region includes 10 from B.C., nine players from Alberta, two from Saskatchewan, two from Manitoba, one from Switzerland and one from the USA.

THE MATCH UP: The Blazers and Giants are meeting eight times this season. These two teams have met the six times already with the Giants winning all six matches. In the last meeting, the Giants recorded a 5-3 win over the Blazers a few weeks ago. These two teams will meet for a final time in Vancouver on March 5th.

KAMLOOPS BLAZERS ‘Who to Watch’: The Kamloops Blazers forwards have had to get the job done this year by committee. Cole Ully (29+37=66), Matt Needham (10+20=30) and Chase Souto (20+11=31) are guys in their third and fourth seasons that are the offensive leaders. The 18-year-old Ully is a 5th round draft pick by the Dallas Stars. Needham is the team captain at only 18, and Chase Souto is the longest tenured Blazer playing his 200th game November 23rd. The Blazers have lost the services of Tyson Ness (12+12=24) and Luke Harrison (4+0=4) for the season due to injuries. Trade deadline acquisitions Matt Bellerive (17+22=39) and Matt Revel (14+29 = 43) are two players that can contribute now and will also be impact players next season. Collin Shirley (13+12=25) was acquired in the Tim Bozon trade and has picked up his offensive totals in the second half. Joe Kornelsen, (9+9=18) and Carson Bolduc (5+6=11) make up the supporting cast for the Blazers as WHL veterans. There has been plenty of opportunity for the young forwards on the Blazers roster as Jesse Shynkaruk, (3+3=6) Eric Krienke, (2+4=6) and Nathan Looysen (1+7=8) are all 17-year-olds looking to prove themselves. They’ve improved as the season has carried on. Nick Chyzowski (2+7=9) is the lone 16-year-old on the roster and has been impressive at both ends of the ice. Deven Sideroff (0+3=3) is a 16-year-old forward who has impressed in the 6 games he’s played with the Blazers this season. On defence, Sam Grist (2+13=15) is the oldest defenseman on the roster but is now out for the season. Veterans Ryan Rehill (3+15=18) and Josh Connolly (11+33=44) have taken on big roles this season. Connolly has had a great season after posting only one goal and six points in his first WHL season. Rehill is one of the tougher players in the WHL with 175 penalty minutes and is among the league leaders in fighting majors. Matt Thomas (0+3=3) is an 18-year-old defensive minded defenseman. Edson Harlacher (0+9=9) was selected by the Blazers in the import draft and has steadily improved playing in all situations for the Blazers. Connor Clouston (0+2=2) is getting a chance to play every night and is getting better. Austin Douglas (1+1=2) is a towering 6’6” defenseman that was acquired at the trade deadline from Seattle. Cameron Reagan (0+0=0) is a 16-year-old defenseman who will finish the rest of the season on the Blazers roster. In goal, the Blazers have 19-year-old Bolton Pouliot (7-24-0-1, 3.89, .889) and 18-year-old Justin Myles (11-6-0-0, 3.66, .889). Cole Kehler is up with the Blazers due to an injury to goaltender Justin Myles, who has yet to play a game with the Blazers.

VANCOUVER GIANTS ‘Who to Watch’: The Giants are coming into the game seventh in the difficult Western Conference and playing some good hockey this season. The production so far has been spread out with forwards Cain Franson, Carter Popoff, and Jackson Houck pacing the Giants forwards offensively. Houck was selected by the Edmonton Oilers in the NHL Draft this past June and has scored 30 times this season. Cain Franson is a 20-year-old fourth year who had a slow start but has found his rhythm at a point-per-game pace. Popoff is only 18 and in his second WHL season and is leading the team in scoring with 60 points. Dominik Volek has been added to the roster for some secondary goal scoring. Joel Hamilton, Tim Traber, Trent Lofthouse, Dalton Sward, Travis McEvoy and Thomas Foster all are veterans on the Giants roster. Young forwards to watch include Ty Ronning and Alec Baer. Both are only 16 and have plenty of talent. The Giants defence has been strong at both ends of the ice. Dalton Thrower and Brett Kulak are both at just under a point-per-game pace and have played well for the Giants. Mason Geersten is a rugged defender who is hard to play against. All three defensemen have been selected in the NHL Draft. Arvin Atwal enters his second season with the Giants and can contribute at both ends of the ice. Tyler Morrison is a veteran for the Giants. Dmitry Osipov and Shaun Dosanjh are the other defensemen on the Giants roster. Payton Lee is the go to guy in goal in only his second WHL season. At 17, he continues to improve and has played 39 games this season. Jared Rathjen is the back up to Lee.

DID YOU KNOW… Matt Revel was acquired from the Saskatoon Blades on January 8th… Matt Bellerive was acquired from the Red Deer Rebels on January 9th… Collin Shirley and Matt Thomas were acquired from the Kootenay Ice on October 22nd… Connor Clouston is the son of current Medicine Hat Tigers GM/Head Coach Shaun Clouston and the nephew of current Prince Albert Raiders Head Coach Cory Clouston… Ryan Rehill was ranked #98 among North American skaters in Central Scouting’s mid-term rankings… Nick Chyzowski won a Silver Medal with Team Pacific at the World U-17 Hockey Challenge… 18-year-old Matt Needham is the youngest captain since Ajay Baines was named team captain as an 18-year-old in 1996-97 season… Associate Coach Mark Ferner is in his second stint with the Blazers after serving as an Assistant, Associate and Head Coach with the Blazers from 2002-2006… Matt Needham’s father Mike played for the Blazers from 1986-1990… Nick Chyzowski’s father Dave played for the Blazers from 1987-1990… Guy Charron took over as Head Coach of the hockey club on January 11…