BLAZERS ON SHAW TONIGHT IN VICTORIA 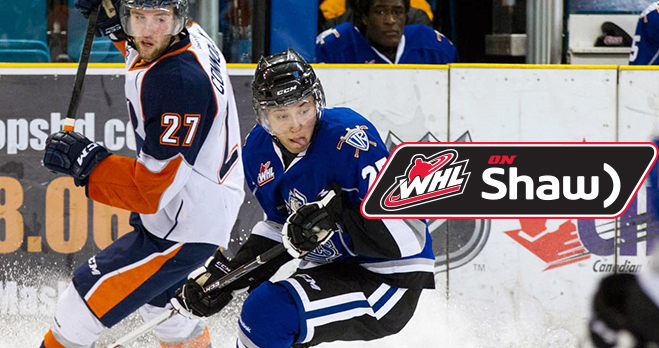 ON THE ROAD: The Kamloops Blazers are into their 33rd season in the Western Hockey League and the 30th season as the Kamloops Blazers. The Blazers have a 13-49-2-3 record through 67 games. The hockey club played 14 of 16 games on home ice between January 11th and February 15th. The Blazers are on a stretch of 10 straight road games. The road trip has taken the Blazers to the USA and Alberta. It will finish off in Victoria this weekend. The Blazers started their road trip playing three games in three nights last weekend in Portland, Seattle and Spokane. They then headed to Alberta for three games in Red Deer, Calgary and Medicine Hat. The Blazers are 1-7-0-0 on the 10-game road trip so far with the lone win coming in Seattle via the shootout. The Blazers will return home next week to conclude the regular season with home game against Kelowna and Prince George and one last road game in Prince George. The Blazers home rink, the ISC, is being occupied with the Canadian Men’s Curling Championships from March 1st – March 9th.

ROSTER BREAKDOWN: The Blazers roster currently sits at 26 players (3 goaltenders, 8 defensemen and 15 forwards). The roster includes 10 players selected in the WHL Bantam Draft, two player from the free agent list, 12 players via trade, and one player selected from the CHL Import Draft. The roster breakdown by region includes 11 from B.C., nine players from Alberta, two from Saskatchewan, two from Manitoba, one from Switzerland and one from the USA.

THE MATCH UP: The Blazers and Royals will meet eight times this season. These two teams have played six times with the Royals winning five of the games. The Blazers will play two games in Victoria this weekend to conclude the season series.

KAMLOOPS BLAZERS ‘Who to Watch’: The Kamloops Blazers forwards have had to get the job done this year by committee. Cole Ully (29+37=66), Matt Needham (10+20=30) and Chase Souto (20+11=31) are guys in their third and fourth seasons that are the offensive leaders. The 18-year-old Ully is a 5th round draft pick by the Dallas Stars. Needham is the team captain at only 18, and Chase Souto is the longest tenured Blazer playing his 200th game November 23rd. The Blazers have lost the services of Tyson Ness (12+12=24) and Luke Harrison (4+0=4) for the season due to injuries. Trade deadline acquisitions Matt Bellerive (17+22=39) and Matt Revel (14+29 = 43) are two players that can contribute now and will also be impact players next season. Collin Shirley (13+12=25) was acquired in the Tim Bozon trade and has picked up his offensive totals in the second half. Joe Kornelsen, (9+9=18) and Carson Bolduc (5+6=11) make up the supporting cast for the Blazers as WHL veterans. There has been plenty of opportunity for the young forwards on the Blazers roster as Jesse Shynkaruk, (3+3=6) Eric Krienke, (2+4=6) and Nathan Looysen (1+7=8) are all 17-year-olds looking to prove themselves. They’ve improved as the season has carried on. Nick Chyzowski (2+7=9) is the lone 16-year-old on the roster and has been impressive at both ends of the ice. Deven Sideroff (0+3=3) is a 16-year-old forward who has impressed in the 6 games he’s played with the Blazers this season. On defence, Sam Grist (2+13=15) is the oldest defenseman on the roster but is now out for the season. Veterans Ryan Rehill (3+15=18) and Josh Connolly (11+33=44) have taken on big roles this season. Connolly has had a great season after posting only one goal and six points in his first WHL season. Rehill is one of the tougher players in the WHL with 175 penalty minutes and is among the league leaders in fighting majors. Matt Thomas (0+3=3) is an 18-year-old defensive minded defenseman. Edson Harlacher (0+9=9) was selected by the Blazers in the import draft and has steadily improved playing in all situations for the Blazers. Connor Clouston (0+2=2) is getting a chance to play every night and is getting better. Austin Douglas (1+1=2) is a towering 6’6” defenseman that was acquired at the trade deadline from Seattle. Cameron Reagan (0+0=0) is a 16-year-old defenseman who will finish the rest of the season on the Blazers roster. In goal, the Blazers have 19-year-old Bolton Pouliot (7-24-0-1, 3.89, .889) and 18-year-old Justin Myles (11-6-0-0, 3.66, .889). Cole Kehler is up with the Blazers due to an injury to goaltender Justin Myles, who has yet to play a game with the Blazers.

VICTORIA ROYALS ‘Who to Watch’: The Royals have a lot of offensive catalysts up front as Brandon Magee, Axel Blomqvist, Ben Walker, Steven Hodges, Austin Carroll and Logan Nelson are leading the way. Magee is into his fourth WHL season and is going along at a point-per-game pace. Blomqvist has been a great pick up for the Royals with the 6’6” forward possessing a ton of skill for his size. Walker and Nelson are both 20-year-olds and are into their third season with the Royals and have watched their offensive numbers pick up. Hodges is into his fourth season with the Royals and shows his worth on the score sheet and in the faceoff circle. Carroll has had a good season and leads the Royals with 33 goals this season. The Royals have a ton of size and grit in their lineup with Logan Fisher, Taylor Crunk, and Jack Palmer offering up secondary scoring. The future of the Royals is bright as Brandon Fushimi has 13 goals in his second WHL season. Other young players include Jack Walker, Mitch Skapski, and Tyler Soy. Soy has 26 points in his first WHL season. The Royals defence has improved drastically this season. Jordan Fransoo and Brett Cote are the steady veterans that contribute at both ends of the ice. Keegan Kanzig is a towering defenseman that can be intimidating to play against as he stands at 6’5” and 242 pounds. The addition of Travis Brown has added offense and size. Joe Hicketts and Ryan Gagnon are in their second year in the WHL and both have bright futures. Hicketts is integral for the Royals and is back after missing most of the year due to injury. Chaz Reddekopp and Jake Kohlhauser are the rookies on defence. In goal, two veterans return as 19-year-old Patrik Polivka and 18-year-old Coleman Vollrath have both been outstanding.

DID YOU KNOW… Matt Revel was acquired from the Saskatoon Blades on January 8th… Matt Bellerive was acquired from the Red Deer Rebels on January 9th… Collin Shirley and Matt Thomas were acquired from the Kootenay Ice on October 22nd… Connor Clouston is the son of current Medicine Hat Tigers GM/Head Coach Shaun Clouston and the nephew of current Prince Albert Raiders Head Coach Cory Clouston… Ryan Rehill was ranked #98 among North American skaters in Central Scouting’s mid-term rankings… Nick Chyzowski won a Silver Medal with Team Pacific at the World U-17 Hockey Challenge… 18-year-old Matt Needham is the youngest captain since Ajay Baines was named team captain as an 18-year-old in 1996-97 season… Associate Coach Mark Ferner is in his second stint with the Blazers after serving as an Assistant, Associate and Head Coach with the Blazers from 2002-2006… Matt Needham’s father Mike played for the Blazers from 1986-1990… Nick Chyzowski’s father Dave played for the Blazers from 1987-1990… Guy Charron took over as Head Coach of the hockey club on January 11…