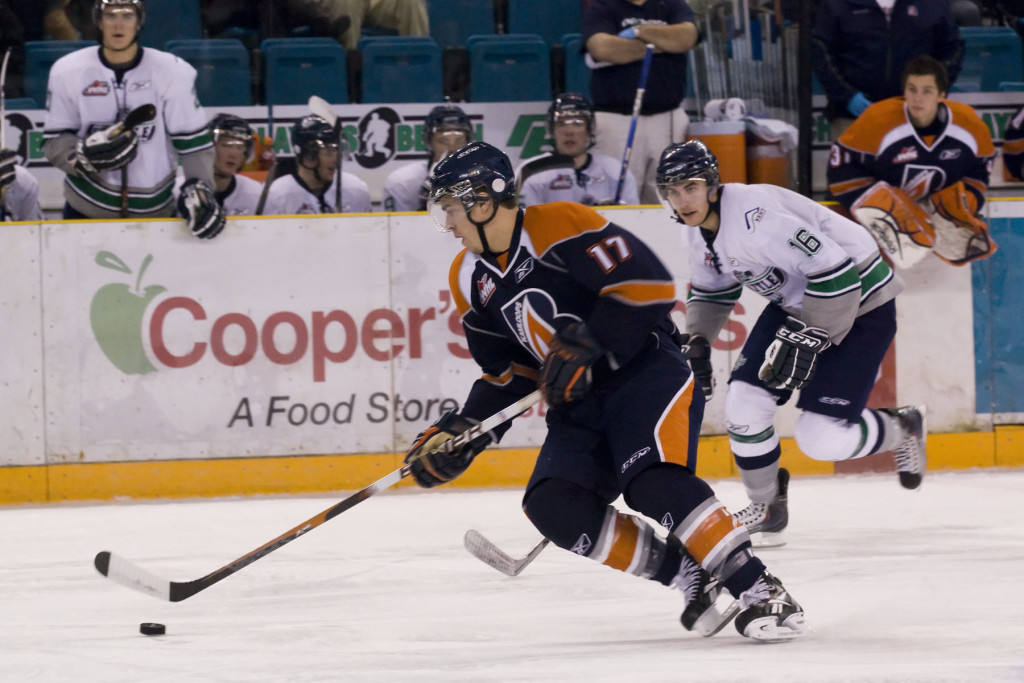 WHAT’S AHEAD: The Blazers finished the month of December with a 4-6-1-0 record. The game tonight concludes a stretch of playing 8 of the last 10 games on the road. The Blazers will head home immediately following the game as they host the Kelowna Rockets on January 2nd. They then play Moose Jaw on January 4th and Chilliwack on January 7th. They will be in Kelowna on January 8th to close out a stretch of 8 games in 13 days following the Christmas break. The month of January is a busy one for the Blazers as they play 15 games in 29 days.

HEAD-TO-HEAD: This is the second of four meetings between these two teams this season. On October 30th, the Blazers downed Seattle in overtime after outshooting the Thunderbirds 52-25. Colin Smith and Austin Madaisky had the goal for the Blazers in regulation time. Travis Bobbee and Marcel Noebels scored the Thunderbirds two goals. Calvin Pickard stopped 49 shots for the Thunderbirds and was named 1st star on the night. Winnipeg native Jordan DePape scored the game winner and goaltender Jeff Bosch stopped 23 shots for the win. These two teams will meet again in Kent on January 18th, and close out the season series in Kamloops on February 9th.

ROSTER BREAKDOWN: 15-year-old forward Matt Needham and 16-year-old defenseman Landon Cross were both called up by the hockey club following the Christmas break, and are expected to be with the Blazers until Sunday. Needham has a goal and 3 assists in 5 games with the Blazers this season. Cross is playing with the Midget AAA Brandon Wheat Kings and has 14 points in 26 games. He was drafted in the 3rd round of the bantam draft in 2009. He is pointless in 3 games with the Blazers. The Blazers roster currently sits at 24 players (2 goaltenders, 8 defensemen and 14 forwards). The roster includes 10 players selected in the WHL Bantam Draft, 8 players via trade, 4 players from the free agent list, and 2 players selected from the CHL Import Draft. The roster breakdown by region includes 6 players from Alberta, 6 from B.C., 2 from Manitoba, 4 from Saskatchewan, 4 from the USA, 1 Slovakian, and 1 German.

COUNTRY AND REGION CALLS: The Blazers are missing some bodies for the next two weeks. Defenseman Brady Gaudet and forward Logan McVeigh, both 16-year-olds from Saskatchewan, are playing in the U-17 World Challenge for Team West. Gaudet, who was the Blazers 1st round pick in 2009, has 4 goal and 2 assists in 26 games this season. McVeigh, who was the Blazers 2nd round pick in 2009, has put up 3 goals and 4 assists in 28 games with the Blazers. Both players have contributed on the score board with McVeigh picking up a goal and 3 assists, and Gaudet picking up an assist as Team West is 1-1 in the tournament losing to Team Pacific and defeating Czech Republic. The tournament runs from December 28th – January 4th in Winnipeg. Bernhard Keil is playing for Germany at the World Junior Championships in Buffalo, NY. He leads Germany with 15 shots on goal in 4 games, as they play the Czech Republic in the relegation round. Third year forward Dalibor Bortnak is playing for Slovakia at the World Juniors and is pointless in 3 games. The 19-year-old Slovakian has had a good start to the year with 27 points in 31 games. The Slovaks will play Norway in their first relegation round game.