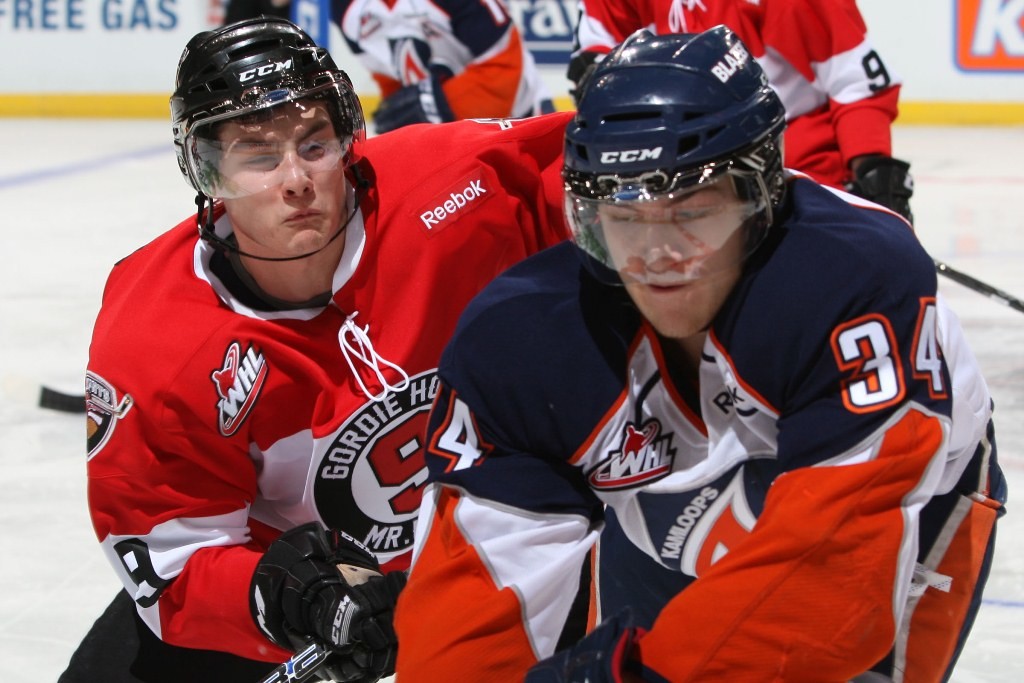 The Winterhawks played a solid road game in scoring timely goals in a 3-0 win over the Blazers. The Blazers had their chances but were turned aside by goaltender Mac Carruth. Brendan Leipsic had a goal and an assist and Oliver Bjorkstrand finished with two assists for the Winterhawks. Recap and Highlights.

Brendan Ranford scored the game winning goal 10 seconds into the game as the Blazers went on to win 6-0 over the Giants. The Blazers had six different goal scorers with Ranford leading the way finishing with a goal and two assists. Colin Smith and Cole Ully also had multi-point nights with a goal and an assist. Cole Cheveldave earned his fourth shutout of the season. Recap and Highlights.

The Blazers played a solid road game but were stoned by goaltender Garret Hughson in a 2-0 loss in Spokane. The Chiefs scored two goals 28 seconds apart in the second period to gain the lead. The Blazers had some terrific chances in the third period including a breakaway by Brendan Ranford and post by JC Lipon. Recap and Highlights.

Ranford Ready to Set Record on Saturday Night at Home

Blazers 20-year-old forward Brendan Ranford is on the verge of setting a Kamloops Blazers record for most career games. Ranford has suited up for 339 games in a Blazer uniform which is only two shy of C.J. Stretch’s 341 career games. If all goes well this week, Ranford will play his 342nd game on Saturday when the Blazers host the Vancouver Giants.

Some highlights of Ranford’s career stats include:

Brendan Ranford and Colin Smith are each making their way up the Kamloops Blazers / Jr. Oilers’ scoring charts.

The Blazers (41-17-2-3) sit five points behind the B.C. Division leading Kelowna Rockets (44-15-1-3) with nine games left in the season. The Blazers and Rockets will meet three times over the final few weeks of the regular season.

Head Coach Guy Charron has a career record of 138-93-7-12 with the Blazers over three and a half seasons. His 138 coaching wins with the Blazers is third all-time behind Don Hay (144) and Ken Hitchcock (291). He is seven wins shy of passing Don Hay’s 144 victories as the Blazers Head Coach for second on the all-time list.

The 2013 Kamloops Blazers Hockey School is now open for registration! Hockey School will be held from August 12th – 16th with the Blazers coaching staff, current and former players instructing.

Download the registration form by following this link or pick up a form from the Blazers Office. If there are any questions pertaining to Hockey School give Ashley Neuls a call at the Kamloops Blazers office at 250-828-1144.

It has been a terrific year for many players that have already achieved new career high totals. Colin Smith leads the way with 38 goals, 57 assists and 95 points playing in all 63 games this season. Smith has eclipsed his career high in goals and points set last year with 35 goals and 85 points. Smith also is the Blazers iron man playing in 252 consecutive games. He currently sits third in WHL scoring and is looking to become the first Blazer to eclipse 100 points since Erik Christensen in 2002-03.

Others who have reached career highs in points this season include Chase Souto, Cole Ully, Sam Grist, Kale Kessy, and Landon Cross.

The Blazers are up to 7th in the BMO CHL MasterCard Top 10 with a 41-17-2-3 record. The hockey club has been in the rankings for almost the entire season. The Blazers have either been honourable mentions or as high as second in the rankings. To view the current rankings, follow this link.