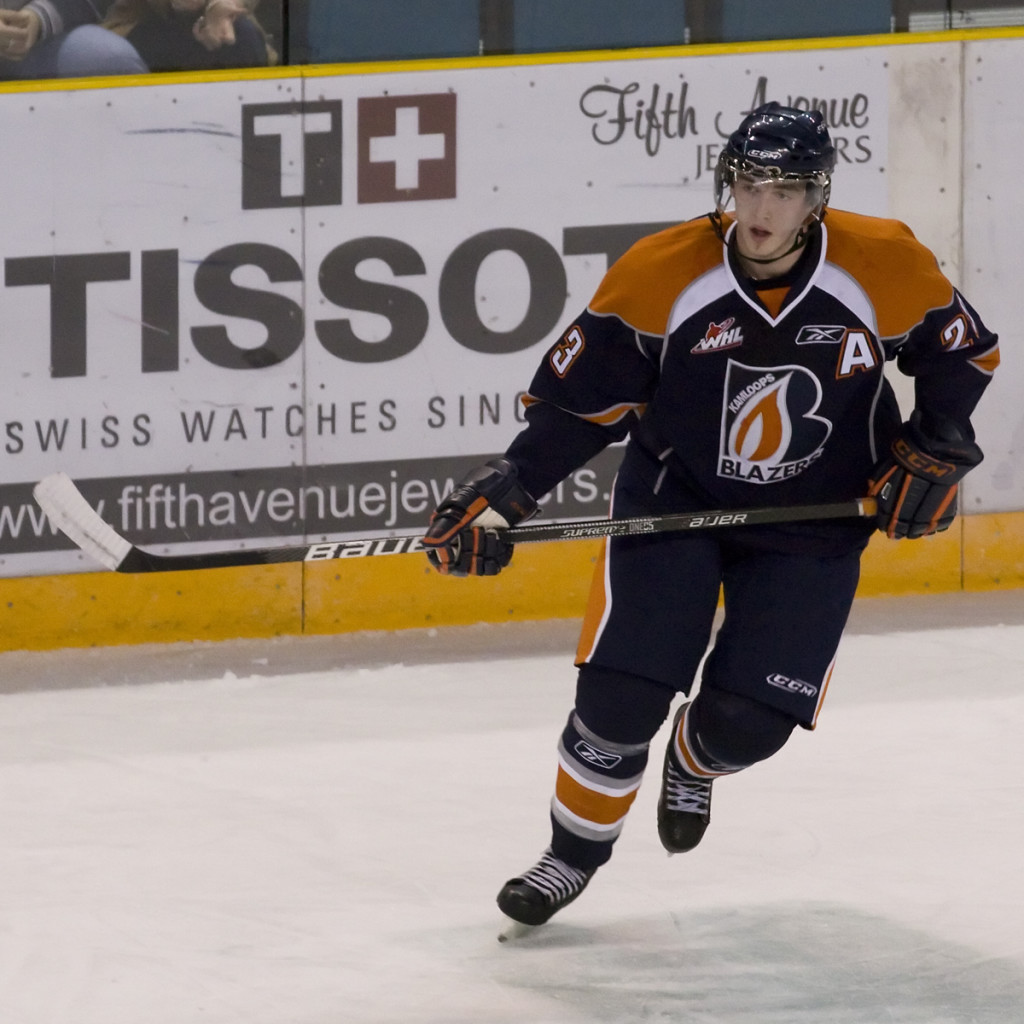 A powerplay goal by the Silvertips with 3:31 to play lifted Everett to a 3-2 victory over the Blazers. The first period was dominated by the Blazers, who out shot the Silvertips 21-6, but found themselves down 1-0 after Ryan Murray scored on a rebound for the ‘Tips. The Blazers though continued to work hard and tied the game up in the last five minutes of the second period. Corey Fienhage finished up a pretty play after some good work in the offensive zone by Dalibor Bortnak and Brendan Ranford as it was 1-1 going into the third period. Tyler Maxwell lifted the ‘Tips back out in front only 1:16 into the third period for his 34th of the season and a 2-1 ‘Tips lead. Again, the Blazers came back with Colin Smith netting his 14th on the season beating goaltender Kent Simpson high on the glove to make it 2-2. Maxwell was the hero as his shot went off the post and in past goaltender Jeff Bosch for a 3-2 Silvertips win. The Blazers outshot the ‘Tips 38-20 and were 0-for-5 on the powerplay and 3-for-4 on the penalty kill.

The Blazers played a strong game in downing the Chilliwack Bruins 2-1 at home Friday night. Colin Smith opened the scoring on the powerplay after he walked off the wall and his shot beat goaltender Lucas Gore over the shoulder for a 1-0 lead. Ryan Howse tied it for the Bruins when he beat Josh Caron wide and fired it over Jeff Bosch‘s glove to make it 1-1. It was all Blazers in the second period as they had two 5-on-3 powerplays but couldn’t beat Gore as he was sensational in the period stopping 19 shots for the Bruins. Colin Smith was a victim of Gore’s goaltending as he found a way to keep the puck out of the net. Ryan Hanes had a glorious chance in the dying seconds of the period but Gore again robbed him with his glove. Hanes stepped out of the penalty box in the third period going in on a 2-on-1 finally beating Gore but not the goal post. After Brandon Manning took a 5-minute major for boarding, the Blazers finally got one past Gore. Jordan DePape found a rebound and buried it off the back bar to give the Blazers a 2-1 lead. From there, the Blazers cruised to a 2-1 victory on home ice. Gore stopped 33 of 35 shots while his counterpart was very good as Jeff Bosch made 24 of 25 saves on the night. The Blazers were 2-for-9 on the powerplay and 6-for-6 on the penalty kill.

The Blazers started quick but faded as the game went on and fell 4-3 to the Bruins in Chilliwack. Dylan Willick scored first for the Blazers when his shot went through two Bruins and fooled goaltender Lucas Gore for a 1-0 Blazers lead. The Blazers made it 2-0 when Tyler Hansen fired a shot towards the net and Thomas Frazee tipped it by Gore as the Blazers took the lead into the second period. The Bruins scored 43 seconds into the second period on a delayed penalty as Ryan Howse buried a rebound and it was 2-1. Howse tied it on the powerplay beating goaltender Jeff Bosch on the glove side to tie the game 2-2 going into the third period. Again, the Bruins scored an early goal 24 seconds into the third period as Roman Horak buried his 22nd of the year and the Bruins took the lead for the first time in the game. The Blazers didn’t go away though, as Bernhard Keil got his 2nd goal of the season when his shot deflected off a stick and beat Gore to make it 3-3. The Bruins iced the Blazers when Bandon Magee buried his own rebound to lift the Bruins to a 4-3 victory. Jeff Bosch took the loss making 24 saves while the Blazers were 0-for-4 on the powerplay and 3-for-4 on the penalty kill.

The Kamloops Blazers Hockey Club is proud to play a game in Whitehorse, Yukon as part of Scotiabank CBC Hockey Day in Canada. This will be quite the unique opportunity for our players as they will play the Vancouver Giants in a sold out Takhini Arena on Saturday, February 12th starting at 4:00pm. The WHL will be offering the webcast for Free on the WHL website and also on cbc.ca/sports.

After recently getting back forwards Jordan DePape and Dalibor Bortnak from injuries, the Blazers suffered a significant setback on the backend losing two defensemen long-term. Austin Madaisky suffered a hairline C-7 fracture in the neck on Friday versus the Chilliwack Bruins. The 6’2” 5th round NHL pick of the Columbus Blue Jackets will go home for the rest of the season to recover from the injury. He is expected to make a full recovery and be ready for training camp in late August 2011.

Brandon Underwood suffered a torn MCL in his knee in the same game on Friday night. He will miss the next 4-6 weeks, as the Blazers hope to return the California native before the playoffs come in mid-March.

The Blazers continue to be without Chase Schaber who could possibly return some time this week. Goaltender Cam Lanigan is expected to be back on the bench this week after suffering a concussion in practice last Monday.

The Blazers are excited to announce that in conjuction with Canadian Western Bank and Kamloops KIA $2,140.00 has been raised for Big Brothers Big Sisters of Kamloops. For more information, CLICK HERE.

Marty Hastings of Kamloops This Week wrote an article in regards to 2-time Stanley Cup Champion Bill Ranford making an appearance at practice to aid the Blazers. CLICK HERE to read the article.

In another article, Hastings poked fun at Blazers forward Ryan Hanes and tells us what the organization have put in place to follow the CHL’s Anti-Doping policy. CLICK HERE for this article.

The Kamloops Blazers continue to be in a tight playoff race at the moment as three teams are separated by 2 points and fighting for the last playoff spot at the moment. The Blazers hold the 8th position right now with 49 points, while Chilliwack has 48 points and Seattle has 47 points. The Blazers have a big week ahead as they host the Seattle Thunderbirds, Wednesday, February 9th. They will then head to Whitehorse to play the Vancouver Giants on Saturday, February 12th.

Austin Madaisky, Neck, Out for Season