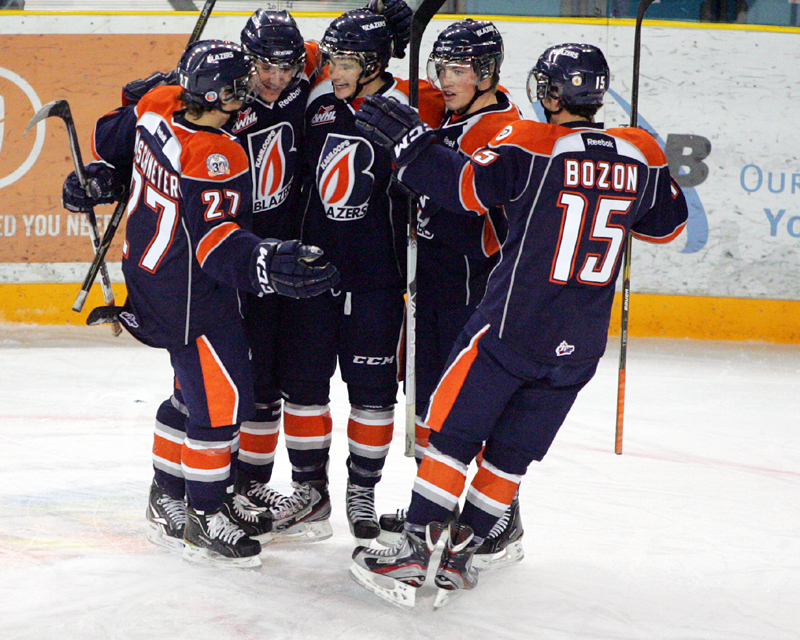 Brendan Ranford led the Blazers to a thrilling 5-4 overtime win over the Portland Winterhawks on Friday night. Ranford had four goals and an assist in the victory which included the overtime winning goal. His line mate Chase Schaber finished the game with a goal and three assists. Cam Lanigan was terrific in goal as he stopped two penalty shots to preserve the victory for the Blazers. Full Recap and Highlights.

The Blazers arrived home in the early hours of Saturday morning. Despite the travel the Blazers shut out the Prince George Cougars 3-0 on home ice. Dylan Willick, Colin Smith and Tim Bozon were the goal scorers for the Blazers. Goaltender Cole Cheveldave recorded his first WHL shutout making 26 saves in the victory. Full Recap and Highlights.

On Sunday, the Blazers played a great second period outshooting the Rockets 16-4 in the period and took a 3-1 advantage. The Blazers shut the door in the third period and won 3-2. Colin Smith, Brendan Ranford and JC Lipon scored the goals for the Blazers. Goaltender Cole Cheveldave improved his record to 4-0-0-0 making 23 saves in the win. Full Recap and Highlights.

Pink Power Play month is well under way and the Kamloops Blazers will be raising money throughout the month to support Breast Cancer. The Blazers will be wearing a specially designed Pink Reebok Jersey on Friday, October 28th when they host the Kelowna Rockets. Following the game a “jersey off our back” presentation will be made to the winning bidders. To bid on a jersey, please call or email Ashley Neuls at 250-828-1144 or aneuls@blazerhockey.com. Updated Bids and More Information.

The Blazers reassigned 17-year-old goaltender Taran Kozun to the SJHL’s Nipawin Hawks. The young goaltender was one of three goaltenders on the Kamloops Blazers roster. Read More.

Check out the promotional events schedule throughout the 2011-12 WHL season. For the Full Schedule.