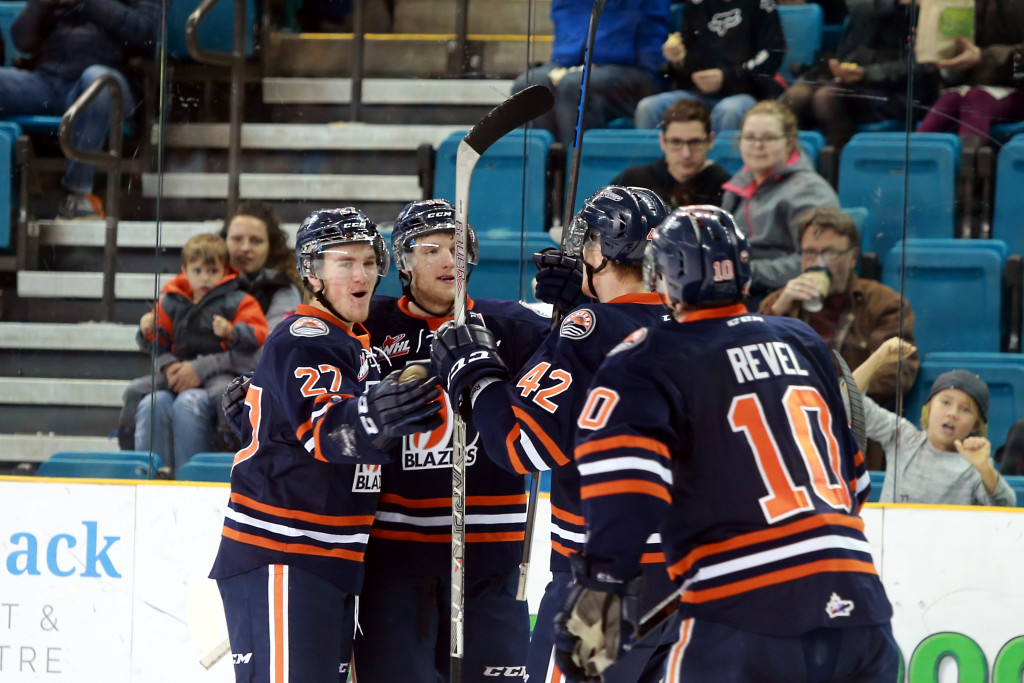 The Blazers will look to carry the momentum from last night’s 5-0 rout over the Giants into action tonight as the team’s meet again at the Sandman Centre.

The win was the second in a row for the Blazers (25-22-5-3), and for the Giants (21-29-4-2) was their consecutive loss. Vancouver now sits 10 points back of Kamloops for the eighth and final playoff spot in the Western Conference.

Blazers goalie Connor Ingram made 34 saves to blank the Giants for his third shutout of the season. Among WHL goalies, Ingram now sits eighth in goals-against-average (2.74), fifth in save-percentage (.917) and tied for fifth in wins (22).

Five different Blazer players scored last night, including Ryan Rehill who returned after missing seven games with a lower-body injury. His seventh goal of the season, a powerplay marker at 10:00 of the first period, gave the Blazers a lead they never looked back on and stood as the eventual game-winner. Matt Revel had a goal and an assist for the Blazers, and Collin Shirley and Deven Sideroff each had two assists.

After a stretch of losing four straight games and eight of their last nine, the Blazers now have won two straight, which Rehill says is a step in the right direction for his group.

“We’re still showing some good signs of turning it back around”, Rehill said. “Hopefully we can do that and start getting some wins in the last stretch here and solidify our playoff spot in the next couple weeks.”

Heading into action tonight, the Blazers sit eighth in the Western Conference and have a five-point cushion over the ninth-place Tri-City Americans. Kamloops is tied with the seventh-place Portland Winterhawks with 58 points; Portland has three more wins in the same number of games.

Rookie defenseman Nolan Kneen continues to sit out with a lower-body injury.

Puck drop tonight at the Sandman Centre is at 7pm.