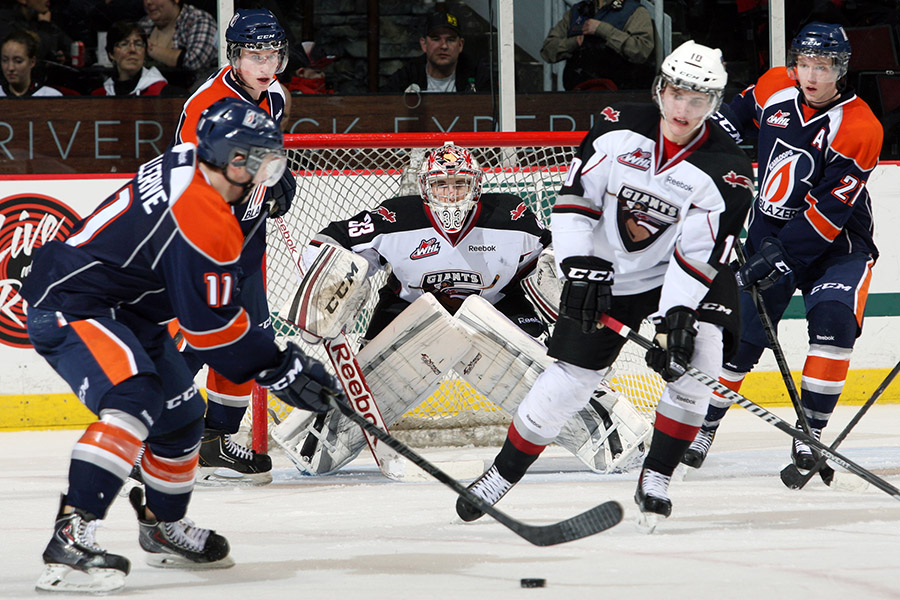 The Giants had a strong second period and started to wear down the Blazers. They eventually scored with 4:05 remaining in the period as Cain Franson banged away on a rebound and recorded his 29th goal of the season. The Blazers had a great chance to tie the game up in the late stages of the period. Ryan Rehill was denied point blank by goaltender Payton Lee on a power play as the Giants took a 1-0 lead into the third period.

The Giants recorded an early goal as the Blazers were caught on a long shift to start the third period. Joel Hamilton was first on a rebound and scored his 10th goal of the season 58 seconds into the final period to take a 2-0 lead. The Blazers looked as though they were running out of time to push, but eventually made this one close scoring with 52 seconds left. Cole Ully took the puck end to end and put a puck in front of the net as Matt Bellerive scored his 18th goal of the season to make it 2-1 late in the game. The Blazers had their chances in the final 52 seconds, but Payton Lee was solid and denied three shots to give the Giants a 2-1 win.

The Giants outshot the Blazers 37-18 as Bolton Pouliot took the loss with 35 saves and Payton Lee made 17 saves in the Giants win.

The Blazers will now head to Vancouver Island to play two games against the Victoria Royals on Friday and Saturday night to conclude a 10-game road trip.