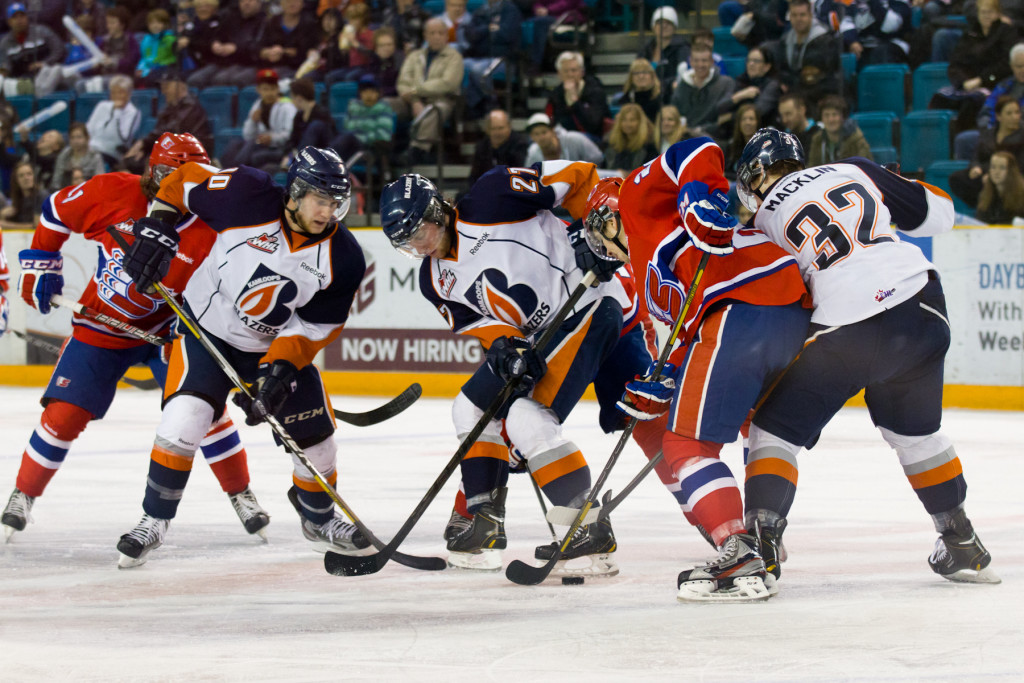 Timely goals by the Spokane Chiefs and spectacular goaltending from Garrett Hughson earned them a 2-0 victory over the Kamloops Blazers on Saturday night in Spokane. The Blazers were a bit slow to start the game with the Chiefs trying to take advantage of their road legs. The Blazers were forced to kill off four penalties in the first period including a lengthy five-on-three to keep the game scoreless. Cole Cheveldave made a couple of good saves and the Blazers penalty killers were on their game.

The Blazers settled down in the second period and started to gain momentum. They created a few good chances early on but goaltender Garret Hughson was making saves and playing well for the Chiefs. The Chiefs got an odd goal as Blake Gal took the puck off the boards in the offensive zone spinning around a firing it at the net. He beat goaltender Cole Cheveldave to make it 1-0 Chiefs. The Chiefs followed that up with a goal 24 seconds later as a Blazer defender fell going back for the puck which gave Todd Fiddler a breakaway goal for a 2-0 Chiefs lead midway through the second period. The Blazers would have a power play shortly after the Chiefs goals but couldn’t convert. The game remained 2-0 through two periods.

In the third period, the Blazers were in the offensive zone for virtually the entire period. The Blazers had ample opportunity to  tie the game up in the third period but could not convert. Brendan Ranford was sent in on a breakaway but he fell on his way to the goal. Shortly after Colin Smith set up JC Lipon for an open net but he rung his shot off the post. As the period wound down, the Blazers continued to create chances with Colin Smith having a terrific chance but his shot went off the helmet of goaltender Garret Hughson. Despite the opportunities and territorial dominance in the third period, the Blazers couldn’t score in a 2-0 road loss to the Chiefs.

Goaltender Garret Hughson earned the game’s first star making 32+ saves in the game. Cole Cheveldave took the loss with 19 saves for the Blazers.

The Blazers return home with only nine games remaining on the schedule. The hockey club has a busy week next week as they are home to Vancouver on Wednesday night before playing three games in three nights on the weekend.