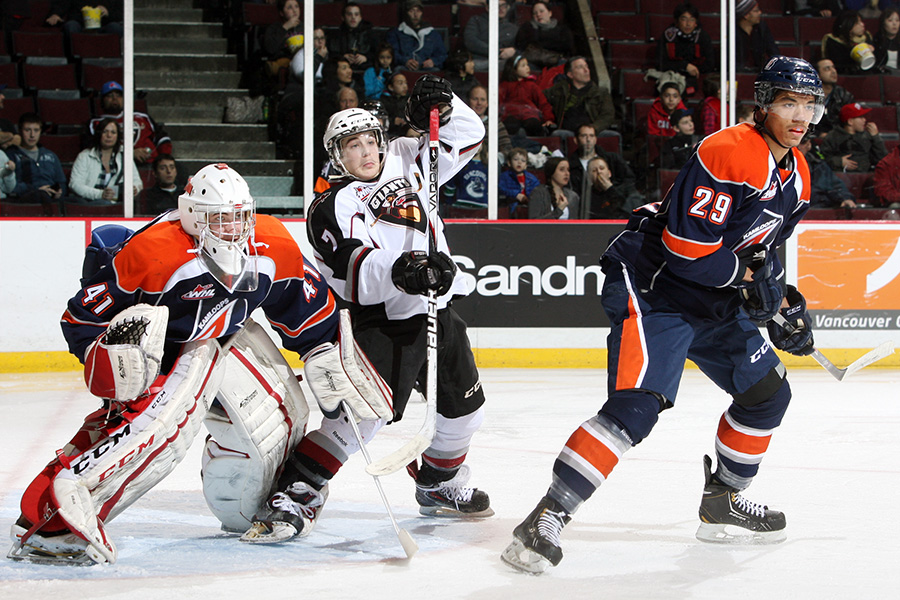 The Thunderbirds scored 6:14 into the game to take a 1-0 lead as Shea Theodore’s point shot found its way through a maze of bodies. There was a scare shortly later as Russell Maxwell bulled over goaltender Bolton Pouliot 7:03 into the game. Pouliot struggled to get up, so 16-year-old goaltender Cole Kehler was forced to take over early in the game. Kehler was solid and the Blazers took advantage of a turnover. Collin Shirley picked off a pass and beat former Blazer goaltender Taran Kozun through the legs for his 12th goal of the season to make it 1-1 with four and a half minutes to go in the period. Cole Ully made it 2-1 for the Blazers 16 seconds later as his attempted pass went off Justin Hickman and past Kozun. The Blazers took the 2-1 lead into the second period.

The Blazers had a solid second period but did not score. The Thunderbirds got a goal past Kehler as Alex Delnov’s shot on the power play beat Kehler high to tie the game up at 2-2. The game carried on at 2-2 into the third period.

The Blazers continue to play short as Matt Needham was unable to play due to an injury suffered in Portland. With only 17 available skaters and one goaltender, the Blazers were worn down in the third period. It was time for 16-year-old goaltender Cole Kehler to shine as he made 16 saves in the period as the Thunderbirds outshot the Blazers 16-2 in the final frame to send the game to overtime.

Each team had their chances in overtime as Cole Kehler robbed Ryan Gropp stacking the pads and Taran Kozun stoned Matt Revel on a breakaway. The game headed to the shootout.

Jesse Shynkaruk and Matt Bellerive each scored in the shootout as Cole Kehler stopped three out of four shooters to give the Blazers a 3-2 win over the Thunderbirds.

The Blazers finishd 3-1-0-0 against the Thunderbirds this season including 2-0-0-0 in Seattle.

Cole Kehler earned his first career WHL win with 33 saves and three more in the shootout. Taran Kozun stopped 28 shots for the Thunderbirds.

The Blazers continue their road trip Sunday night at 5:00pm as they are in Spokane for their fourth game of a 10-game road trip.