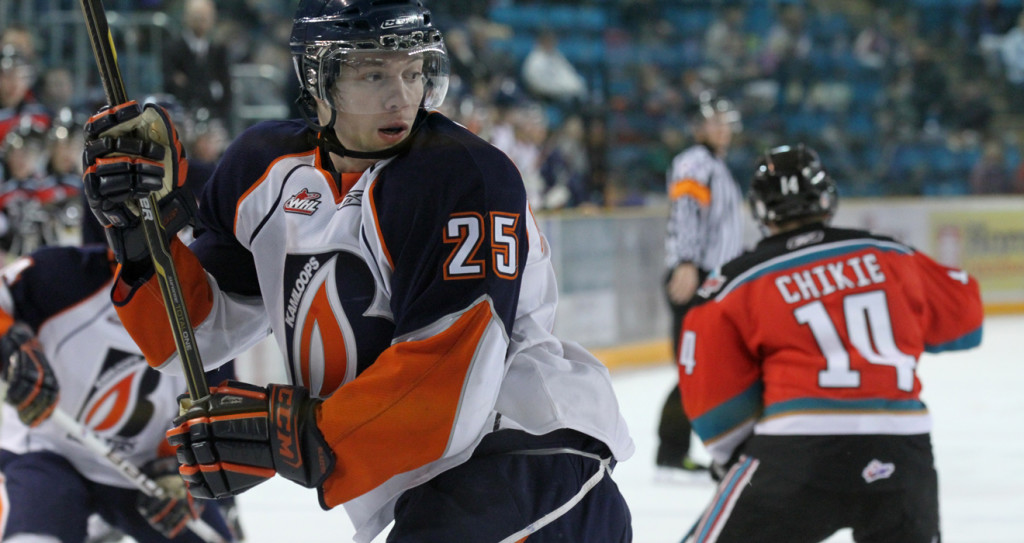 THE END: The Blazers had a strong February finishing with a 7-3-1-0 record during the month, but are 0-5-0-2 with losses to Kelowna, Lethbridge, Chilliwack, Tri-City, Kelowna and shootout losses to Kelowna and Prince George in the month of March. The Blazers have played 71 games so far this season and did not play a game this week which was the first time the Blazers didn’t have a mid-week game since this Christmas break. Tonight is the last game of the season for the team, as last night’s shootout losses eliminated them from the playoffs.

HEAD-TO-HEAD: This is the final of eight head-to-head matches between these two teams this season. The Blazers have a lowly 1-5-0-1 record, losing their last six games against the Cougars. In the season opener, the Blazers took down the Cougars 5-2 at home. Brendan Ranford, JT Barnett and Chase Schaber each finished with a goal and an assist in the victory. On October 16th, the Cougars came into Kamloops and won 8-1 as the Cougars scored on their first five shots of the game as Brett Connolly, Sena Acolaste and Charles Inglis each scored twice. On November 27th the Cougars scored a 7-5 victory in Kamloops as Inglis had two goals again. The Blazers lost a pair of games in Prince George on December 17th and 18th both by 3-2 scores. Cougars’ goaltender Ty Rimmer was named the 1st star in both those games. In the last meeting on January 26th, it was a high scoring affair as the Cougars won 9-5 on home ice. Brendan Ranford had a goal and 2 helpers, while Prince George product Dylan Willick pitched in with 2 assists in the loss. Last night, Charles Inglis scored in the shootout to lift to Cougars to victory over the Blazers.

THE PLAYOFF PICTURE: With only 1 regular season games left the Blazers find themselves tied for the 9th place with Seattle and unable to qualify for the 2011 WHL Playoffs. With last night’s victory, the Prince George Cougars qualified for the post season.

DID YOU KNOW…The penalty killing unit is currently 20th in the league this season at 76.6%, while the powerplay is in 11th at 19.5% going 69-for-352… Ryan Hanes is the leader in penalty minutes with 165… Colin Smith had his second hat-trick of the season February 25th in Medicine Hat… Logan McVeigh recorded his first multi-point game in Kootenay February 26th… Chase Schaber leads the team in +/- with a +3 rating… Goaltender Jeff Bosch was a perfect 7-for-7 in shootouts this season before Kelowna beat him twice on three shots last weekend and Prince George beat him once on seven shots last night… Colin Smith failed to score in a shootout Saturday and last night which means he is now 3-for-4 in shootouts with all 3 goals serving as the shootout winners… Thomas Frazee had his first four 4-point night with the Blazers assisting on all 4 powerplay goals in the third period in Medicine Hat February 25th… Brendan Ranford was pointless in 7 straight games before being suspended… Goaltender Jeff Bosch is making his 24th consecutive start tonight… Colin Smith, Dylan Willick, JT Barnett, and Bronson Maschmeyer are the iron men on the team, playing in all 71 games this season… Bronson Maschmeyer is the Blazers current iron man playing in his 144th consecutive game.