RECCHI PARENTS WITH MARK EVERY STEP 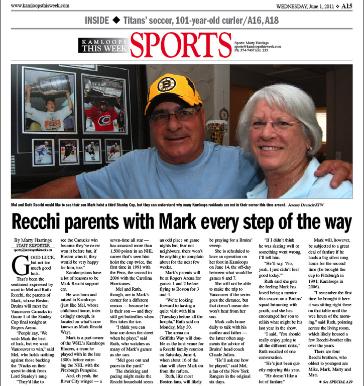 Good luck, but not too much good luck.

That’s been the sentiment expressed by most to Mel and Ruth Recchi, the parents of Mark, whose Boston Bruins will meet the Vancouver Canucks in Game 1 of the Stanley Cup final on Wednesday, June 1, at Rogers Arena.

“People say, ‘We wish Mark the best of luck, but we want Vancouver to win,” said Mel, who holds nothing against those backing the ‘Nucks on their quest to drink from Lord Stanley’s mug.

“They’d like to see the Canucks win because they’ve never won it before but, if Boston wins it, they would be very happy for him, too.”

Kamloopsians have a lot of reasons to be Mark Recchi supporters.

He was born and raised in Kamloops (just like Mel, whose childhood home, interestingly enough, is located on what’s now known as Mark Recchi Way).

Mark is a part owner of the WHL’s Kamloops Blazers, a team he played with in the late 1980s before entering the NHL with the Pittsburgh Penguins.

And, oh yeah, the River City winger — a seven-time all star — has amassed more than 1,500 points in an NHL career that’s seen him hoist the cup twice, the first time in 1991 with the Pens, the second in 2006 with the Carolina Hurricanes.

Mel and Ruth, though, are in Mark’s corner for a different reason — because he is their son — and they still get butterflies when Rex takes the ice.

“I think you can hear me down the street when he plays,” said Ruth, who watches as many of Mark’s games as she can.

“Mel goes out and paces in the yard.”

The shrieking and pacing might make the Recchi household seem an odd place on game nights but, fear not neighbours, there won’t be anything to complain about for the next few weeks.

Mark’s parents will be at Rogers Arena for games 1 and 2 before flying to Boston for 3 and 4.

“We’re looking forward to having a quiet visit with him (on Tuesday, May 31) before all the hoopla,” Ruth said on Monday, May 30.

The arena on Griffiths Way will double as the host venue for a Recchi family reunion on Saturday, June 4, when about 16 of the clan will cheer Mark on from the rafters.

Ruth, like most Boston fans, will likely be praying for a Bruins’ sweep.

She is scheduled to have an operation on her foot in Kamloops on June 14, the off-day between what would be games 6 and 7.

She will not be able to make the trip to Vancouver if the series goes the distance, but that doesn’t mean she won’t hear from her son.

Mark calls home daily to talk with his mother and father — the latter often augments the advice of Bruins’ head coach Claude Julien.

“He’ll ask me how he played,” said Mel, a fan of the New York Rangers in the original six days.

“If I didn’t think he was skating well or something went wrong, I’ll tell him.

Ruth said she gets the feeling Mark has loved being a mentor this season on a Bruins’ squad brimming with youth, and she has encouraged her son to relish what might be his last year in the show.

“I said, ‘You should really enjoy going to all the different rinks,” Ruth recalled of one conversation.

Mark will, however, be subjected to a great deal of fanfare if he hauls a big silver mug home for the second time (he brought the cup to Pittsburgh in 1991; Kamloops in 2006).

“I remember the first time he brought it here it was sitting right there on that table until the wee hours of the morning,” said Ruth, pointing across the living room, which likely housed a few Recchi-brother tilts over the years.

There are four Recchi brothers, who oldest to youngest are Mike, Mark, Marty and Matt — none of them were diehard Canucks’ fans growing up.

Ruth also recalled how the Stanley Cup managed to find its way into Mario Lemieux’s pool 20 years ago.

That is a special memory and the Recchi family is in line for more of those if Mark’s Bruins can get past the Canucks.

“The other two were special, but this would be really special,” said Mel, who laughed in concert with his wife when asked if the City of Kamloops should consider renaming a main artery like Columbia Street after Mark, if he wins another ring.

“With his age and this being his last time . . . not too many guys get a chance to go out that way, as a winner, playing in their home province.”