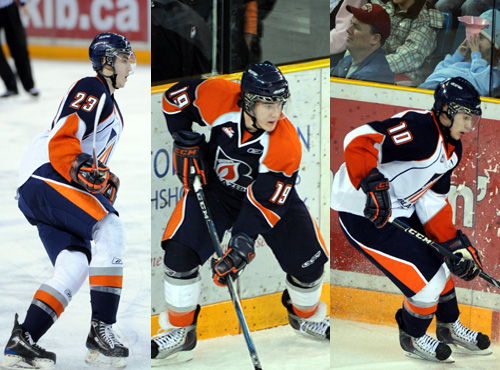 Kamloops, BC – The Kamloops Blazers have six players that will be leaving the hockey club during the next week to go to NHL training camps.

Newly acquired Corey Fienhage, from Apple Valley, Minnesota, will be heading to Buffalo’s training camp on September 11th. The 6’4” 220lb defenseman played this past season with the North Dakota Fighting Sioux in NCAA Div. 1. He was a 3rd round selection of the Sabres in 2008.

Defenseman Austin Madaisky was selected in the 5th round by Columbus in the 2010 NHL draft. The native of Surrey, BC will be heading to his first NHL training camp. Madaisky, who sits at 6’2” 195lbs, had 7 goals and 27 points last season.

Right winger Brendan Ranford was selected by the Philadelphia Flyers in the 7th round in the 2010 NHL draft. The 18 year old had a terrific season scoring 29 goals while adding 36 assists for 65 points. He will leave for Philadelphia on September 11th.

Chase Schaber, a 19 year old center, will be attending the Edmonton Oilers’ training camp as a free agent. Schaber, who sits at 6’0” 195lbs, was acquired in January from the Calgary Hitmen. He played well last season scoring 18 times and collected 49 points.

The hockey club’s latest addition, 18 year old JT Barnett, who was recently acquired from the Vancouver Giants, will be in camp with the Minnesota Wild. Barnett, from Scottsdale, AZ, played the past two years with the Giants.

Joining Barnett in Minnesota will be 19 year old defenseman Josh Caron. The 6’4” 212lb native of Campbell River, BC was second in the league in fighting majors last season with 20. He had 6 points in 60 games last season.

PORTLAND, October 2, 2010 — For the second night in a row Marcel Noebels scores a shootout winning goal to help the Seattle Thunderbirds to a victory.

The game was tied 2-2 after 60 minute of regulation play and five minutes of sudden death overtime.

The Winterhawks shot first in the shootout and Ty Rattie was the first Portland shooter. Rattie shot wide on Seattle goalie Calvin Pickard. Burke Gallimore was the first Seattle shooter and Portland goalie Keith Hamilton made a blocker save on Gallimore.

Brad Ross was the second Portland shooter and Pickard stopped him with a pad save. Noebels was the second Seattle shooter. He came down on Hamilton and waited for the goalie to make a move and then snapped a quick shot over the goalie’s blocker into the upper left corner of the net.

Pickard had to stop Ryan Johansen, who returned Saturday afternoon from the Columbus Blue Jackets training camp, to seal the victory for Seattle. Johansen made a move to his left with the puck but Pickard slid over and denied him.

Gallimore put Seattle (3-2-0-0) in front 1-0 at 7:19 of the first period. Chance Lund chased the puck down in the left corner of the Portland zone. Lund centered the puck to Gallimore coming down the slot. Gallimore redirected the puck past Portland goalie Keith Hamilton on the blocker side for his fourth goal of the year. Defenseman Brenden Dillon had the second assist.

Brad Ross gave the Winterhawks a 2-1 lead when he scored at 15:48 of the first. Ryan Johansen and Taylor Aronson had the assists.

The T-Bird tied the game 2-2 at 15:39 of the second period on a goal by Mitch Elliot. Colin Jacobs took a slap shot from just outside the blue line that hit the boards behind the Portland net. Hamilton misplayed the rebound off the boards and the puck slid into the crease. Elliot was charging the net and backhanded the puck past Hamilton for his first goal of the season.

Seattle outshot Portland 16-10 in the third period and the Winterhawks had a 44-31 lead in shots after 60 minutes of regulation.

The T-Birds next game is Saturday, October 9, against the Chilliwack Bruins at 7:05 p.m. at Prospera Centre.

Overtime – No scoring. Penalties – No penalties.