The Kamloops Blazers had a tough first period and could not complete the come back in a 3-2 home ice loss to the Everett Silvertips.

Everett jumped out to a 2-0 first period lead, while the Blazers outshot the Silvertips 28-7 over the final two periods.

Connor Zary and Caedan Bankier had the goals for the Blazers. Bankier’s was the first of the 16-year-olds WHL career.

Dylan Garand took the loss in goal with 21 saves, while Dustin Wolf earned the win with 34 saves.

The Blazers are on the road next weekend with games in Everett and Kelowna.

The Blazers are home next on Tuesday, October 15th when they host the Swift Current Broncos. 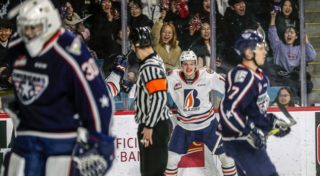