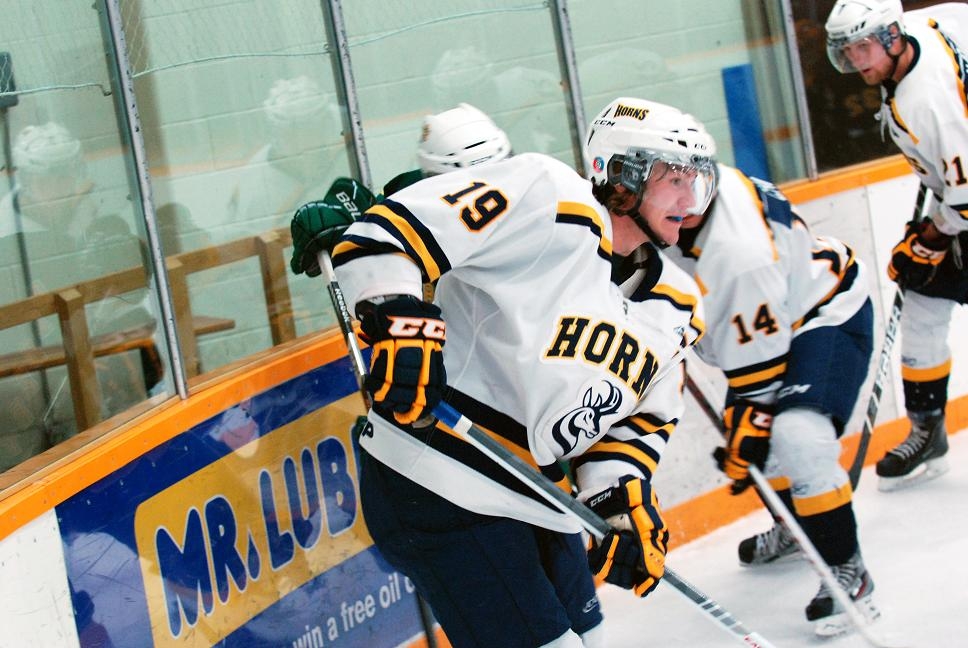 Chase Schaber was known as a tremendously hard working player during his five-year Western Hockey League career with the Kamloops Blazers and Calgary Hitmen.

Now, the 21-year-old Red Deer, AB, is applying that strong work ethic in the classroom as a first-year student at the University of Lethbridge, utilizing his WHL Scholarship.

“It’s going well,” said Schaber, who captained the Blazers in his final WHL season last year, helping the team win the B.C. Division title, and now serves as an assistant captain as a rookie with the U of L Pronhorns Men’s hockey team.

“It’s a bit of a transition going from the Western Hockey League to attending school, taking classes and playing hockey at the same time,” he said.  “It’s good though, because I get to play hockey and get an education.”

Enrolled in the Business faculty, Schaber is learning all over again the kind of dedication one needs to excel in his studies while also playing hockey at a high level.  After all, there are only so many hours in a day, and those hours must be spent wisely.

“Basically, it’s about time management,” he said.  “When you first get to the university level, things are coming at you very quickly, and you need to be able to adjust and prioritize.

“For the first little while, it was a bit of a shock because you have all these assignment and it’s all coming at you quickly, you also have your practice times, and you have to put in time every day for studying,” he added.

Fortunately for Schaber, he has plenty of support among his Pronghorns team mates.  Like all Canada West hockey programs, the Pronghorns’ roster is flush with WHL grads, including a few former WHL team mates.  Having been through the adjustment themselves, Schaber’s veteran team mates are very helpful in offering advice and tips on how to make the balance work.

“The guys that have been in school for the past couple of years, they help you out with what classes to take,” said Schaber.  “We all want each other to do well in school because, in the end, that’s the reason we are at university.”

On the ice, Schaber has enjoyed a strong start to his career in CIS hockey.  Through the Pronghorns haven’t had a lot of success in the standings, Schaber finds himself among the top scorers in the Canada West Conference.

The level of competition in the Canada West conference, Schaber says, is of a higher level than what he was used to during his WHL career.

“Everywhere you go, you know a bunch of guys from the WHL,” said Schaber.  “It’s funny because when I was 16 and 17 in the WHL, a lot of these older guys were bigger and stronger than me, but now I’ve caught up to them.

“It’s a very competitive game up here,” he said.

Drafted by the Calgary Hitmen in the first round of the 2006 WHL Bantam Draft, Schaber spent his first two and a half WHL seasons with the Hitmen.  He was sent to Kamloops at the trade deadline in 2009 and played his final two and a half years in Blazers’ colors.

Over his five-year WHL career, Schaber developed many friendships and grew not only as a hockey player, but as a young man.  He still keeps up with how his old team mates are doing, and cherishes the time he spent playing in the WHL.

“I played five years in the WHL and learned a ton,” said Schaber.  “I’m always on Twitter, seeing updates and keeping up with some of the guys to see how they are doing…it’s awesome that (the Blazers) are doing so well.

“Looking back from when I was a 16-year-old coming into the League to when I was a 20-year-old, it’s tremendous how much you learn, and the life lessons you go through.

“I’m very thankful that I was given the opportunity to play in the Western Hockey League,” he said.